A FEW DAYS/ A FEW DEGREES

What a difference a day or 2 makes, a degree or 10.
Just 4 days ago I was making a list of what was in bloom in one of my clients gardens.
It was a braggart’s list to post on my blog. “Look at this, all you East Coast fools,” was the subtext. “ Sure it’s gray and wet here, but we have sunflowers in December.” No, I do not live in New Zealand, and yes, I did see a sunflower blooming in a street side garden in downtown Seattle on December 9th. It’s been a freakishly mild year, no summer to speak of and a fall that lingered in heat waves and heavy rains, but very little frost. Even here at the farm where our nearness to the mountains guarantees us colder temperatures and more snow than Seattle, we have not had one killing frost until this weekend. The temperatures predicted to be in the 20’s all week should finish off any of that lingering summer and fall that until now was reluctant to move on.
I want to post my “braggart’s list” anyway. Written December 10th it was remarkably long even for us this time of year.
Cuphea sp
Eleagnus x ‘ Sunset’
Fuchsia magellanica ‘Aurea’
Salvia elegans ‘Golden Delicious’
Tropaeolum tuberosum ‘Ken Aslet’
Escheveria ‘Metallica’ (in bud)
Leucanthemum ‘Goldrush’ (one very fresh and new flower)
Begonia richmondensis
Amaranthus ‘Ponytails’
Fuchsia speciosa
Helleborus foetidus ‘Chedglow’
Viburnum x bodnatense ‘Dawn’
Camellia sasanqua
Pittosporum tobira ‘Variegata’
Agapanthus ‘Storm Cloud’
Tulbaghia violacea
Helleborus argutifolius ‘ Silver Lace’
Fragaria alpina
Daphne bholua
Nicotiana ‘Tinkerbell’
If that’s not impressive enough, on Saturday when Michael and I were digging the dahlias and covering the plants waiting to be planted with oak leaves I took a short inventory of what was in bloom at the farm. Remember we’re away from the gentle maritime effects of the Puget Sound, probably in zone 6.5.
We had in bloom on Saturday December 13th
Daphne transatlantica
Rosa bonica
Dahlias ( 2 types )
Calendula
Viola
Not as impressive as the first list I know but who has dahlias blooming in December, except New Zealanders?
Of course now the arctic blast has absolutely scoured the garden. I must admit as much as I like flowers I like a clear ending. Now I know fall is definitely over. 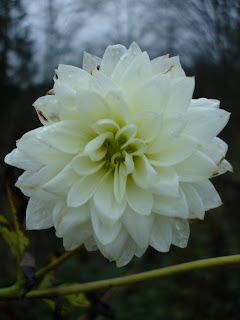 The last dahlia was a portentous snow white. 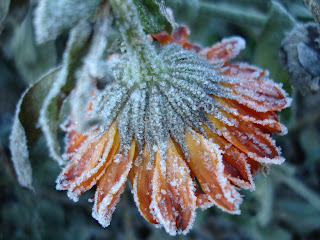