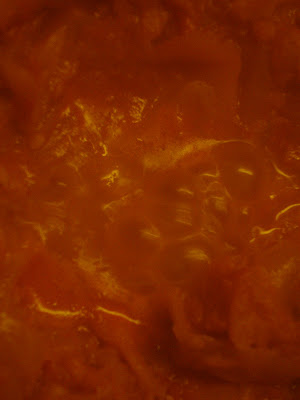 Last night, the last cabbage of the year bubbled down into a delicious curry. 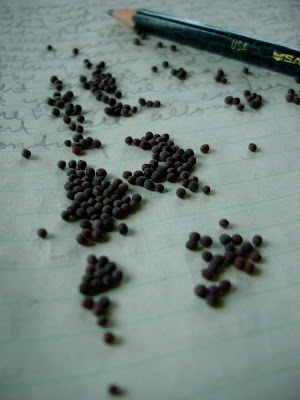 It had started as a seed, as hard and round as a lead pellet, on the 7th of May last year. I started late, as did spring. The seedlings didn’t get into the ground until June 9th. A very late start for a rigorous plant that can take Spring’s changes with ease. A plant that actually benefits from the cool rain and bursts of warmth April and May offer. And sulks in the heat of July and August. Our farm is perfect for cole crops: broccoli, kale , kohlrabi, Napa, and cabbage all do very well in the deep moisture retentive soils of our late afternoon shaded field. Even in the hottest summer on record the cabbages thrived.
We must have had 120 or more heads from the small early ‘Gonzales’ to the mammoth savoy ‘Perfection Drumhead’ to the late winter lingering ‘January King’. When I was digging around in the ‘fridge for what to make for dinner, I found the last cabbage nestled into the vegetable bin among wilted green onions and some leathery lemons. I was inspired, as I often am by cabbage, to make one of my favorite dishes from Camellia Panjabi’s 50 Great Curries of India, the simple recipe which she simply calls: “cabbage with spices and tomatoes”. 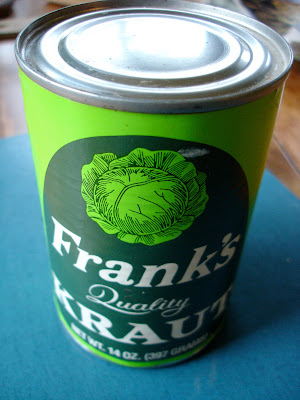 My long love affair with cabbage probably started when I was an art student taking frequent train trips to Chicago from Milwaukee which passed through the kraut fields of Franksville, Wisconsin. The row after row of blue green orbs was as stunning as any Nam June Paik installation, or van Gogh painting Chicago had to offer. There was something about the way the rows peeled through my field of vision as the train sped by that was mesmerizing. But already then there was a deeper more penetrating memory an invisible memory, primal even, which had lodged cabbage so enigmatically in my mind. It is my mother’s creamed cabbage with caraway seed, a recipe that probably came from the Old Country with my grandmother. There is nothing like tender slow cooked cabbage whether it the creamy white and mellow like my mother’s, or fiery and lava red like Ms. Panjabi’s. There is also nothing like coleslaw, sauerkraut or a French potee. 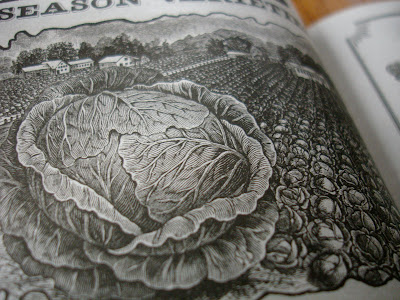 But it is not out of hunger alone that I scour the cabbage section of every seed catalogue that enters the house for new cultivars or heirloom varieties. Cabbages are my roses. Their fetal roundness, they are where babies come from after all, just delight me like a ball does a dog or the full moon does a sufi.
When I woke at 4 a.m. this morning to let the black cat in, the full moon, veiled just by a hint of fog, a bone chilling , gothic fog, was already touching down on the tops of the trees lining the western bluff above the valley. It was a heavy pregnant moon. Full of expectation. A forceful moon splitting open the fist tight buds of the plums and cherries, like I split the last cabbage with the cleaver, before I shredded it and melted it by slow cooking into a delicious curry.
Posted by Daniel Mount at 9:52 AM
Newer Post Older Post Home