We were led deeper into the desert canyon. Night had fallen halfway through our hike in, a newly crescent moon had little power to dispel the deep natural darkness, far from city glow. We had meandered back and forth across the wide canyon bottom, crisscrossing the river that meandered, too, among the boulders, sand flats and rock bars.
Luckily we were being led by friends, people we trusted, who knew the place. It was their secret place. Far from civilization, a jet crossing the sky with the falling stars was forsaken and miniscule. We set up our primitive camp in the dark. Lit a fire that became our catacomb of light, ate burritos, drank whisky and smoked cigarettes. Things that friends would do on a dark night in the desert, while trying to pull constellations from the awe inspiring endlessness.
We slept like angels, or “rocks “ as one of us said the next morning.
I was the first to wake, as I often am. The sun was not yet visible but it’s light erased the stars and their encompassing blackness, brushed our camp with visibility. The air was cool so I lied in my sleeping bag, though my eyes sprung great distances, finally able to fill the darkness with information.
We were in the Sonoran desert alright, in the golden haze of brittle bush (Encelia farinosa) covering the surrounding bluffs stood emblematic saguaros (Carnegiea gigantea). The air was sweet and resinous from creosote bush (Larrea tridentata). The old stone mountains, fallen mountains, falling mountains, enfolded the river. Granite laced with quartz and mica, bubbly scoria in red and black, and slick basalt trundled down in slabs, chunks and granules. 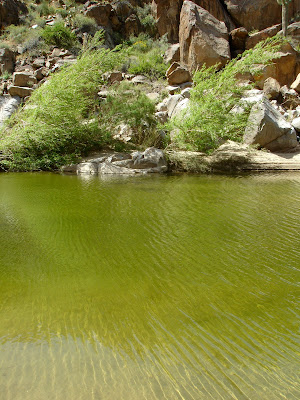 The river formed a pea green pool before our soft sandy camp. Willows, once again verdant, leaving a wet winter and voracious floods behind them, clung to the banks at crazy angles. Willows appearing so tender against the prickly backdrop of teddy bear cholla, prickly pear and ocotillo. Out of place willows, right at home on this river bank in the depths of the desert.
I was shocked by how stark the desert isn’t.
Of course the Sonoran desert is the wettest desert on earth. And during these few precious April days we spent lolling in the chilly current or napping naked on sun warmed rocks, it was obvious. 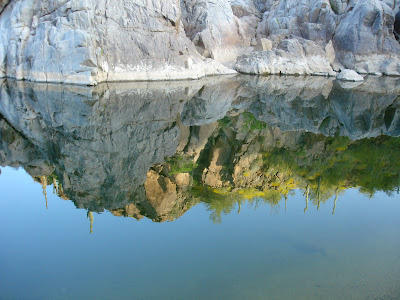 I scribbled notes about the water, the mystery of water. Water bubbling up from hidden springs, water draining from distant snowy mountains. Water always in movement, taking as well as giving as it worked its eroding way, constantly rubbing the canyon smoother and smoother. Desert water, oases, precious water, the same element I often begrudge at home, dread even during the flood season. I will not share these notes grasping at thoughts that tried to turn up a profundity; it would destroy a secret. Besides my wonder was sun-stroked and lazy, took more pleasure in the company of friends than any earnest thinking. Took pleasure in chilly dips, and hot rocks.
Took pleasure in wildflowers...
The desert was in bloom, generously, bee-buzzingly in bloom. This, more like our summer, was someone’s spring, a desert spring warm enough for swimming and sleeping under the stars with no fear of rain or damp morning fogs. Yet absolutely and floriferously spring. Tickling both the poet and the botanist in me. I become acquisitive, need to see every flower, learn it’s name. I was happy this trip to add many new plants to my list, new genera, new species, even a new family. 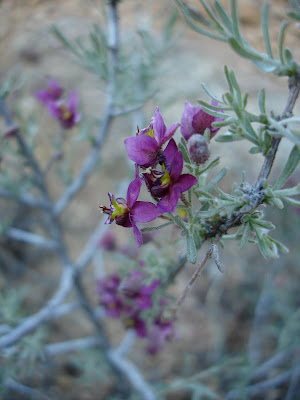 Prostrate Ratany (Krameria lanceolata), not only is this a new genus for me it is also a new family of plants, the small one genus family of Krameriaceae. This genus is semi-parasitic, drawing water from the roots of other plants, a rather sinister strategy for survival in this arid ecosystem where all adaptations are about getting and conserving water. 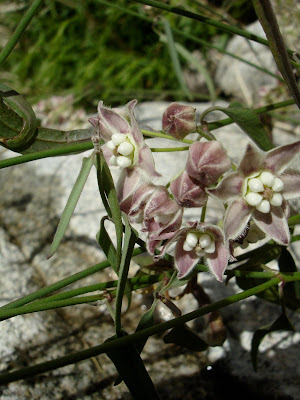 This rambling milkweed (Sarcostemma hirtellum)was a little more familiar, I had assumed it was an Asclepias, but it is a new genus for me in the milkweed family. 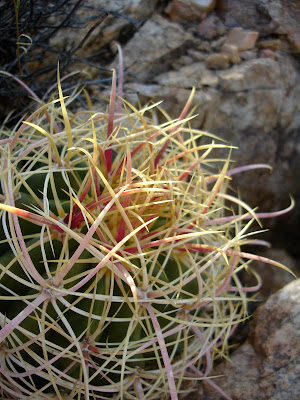 I am still learning the cacti, this barrel cactus ( Ferrocactus cylindraceus) is just a juvenile about the size of a soft ball. They can reach up to 11 feet. 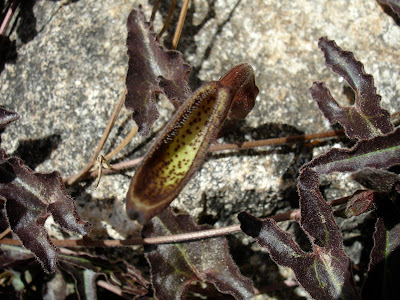 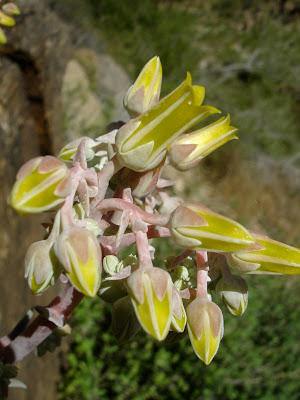 One of my favorite desert succulents dudleya (Dudleya saxosa) is a variable species. This is the first time I’d seen one with pale lemon flowers with white stripes. 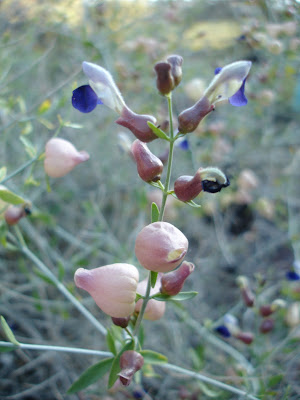 Bladder sage (Salazaria mexicana) is a new genus for me. You can see how it gets its name from the ballooning seed pods. 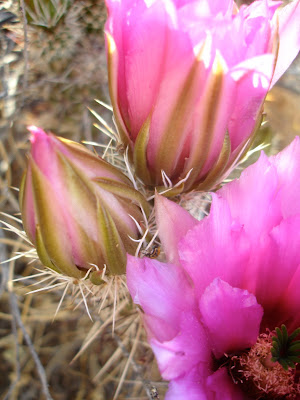 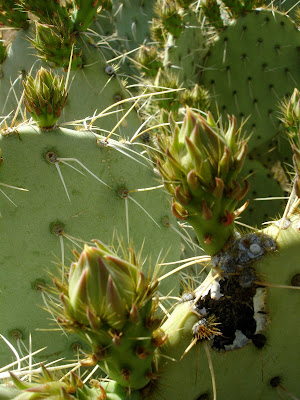 Prickly pear (Opuntia sp.) still waiting to bloom. I could have stayed another week, or month if necessary. 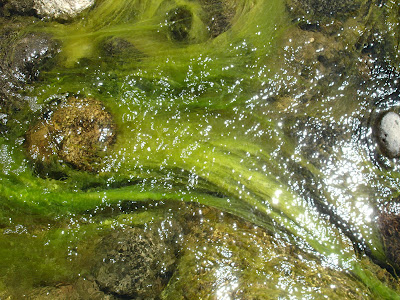 Even if the sinuous algae was beginning to choke this puddle of a river being sopped up by willows and evaporated by an ever hotter sun, I could have stayed. We all could have stayed, sleeping under the stars, finding midday shade for naps, diving into the deep cool pools and climbing out onto the hot rocks until the waters had secreted themselves again into the arid appearance of the desert. 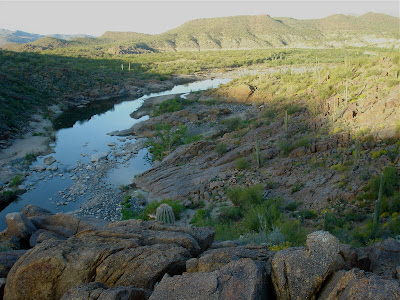