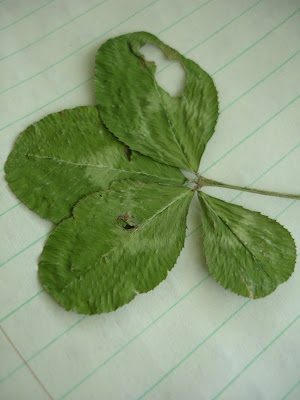 Last week when I was in the garden of my client who envies my weeding career, I held up a big handful of morning glory freshly yanked from a shrub. I held it high like a victor and cried out “ Morning glory; your favorite.”
She laughed and lamented, “I wish my favorites grew like that.”
I couldn’t help but venture, “Then we’d be pulling our favorites out like weeds,too.”
“I guess so,” she conceded and left me to the task at hand.
I guess I am lucky to include some weeds among my favorite plants. Actually I could say one of my favorite plants is a weed. No, not dandelions, though I do love dandelions. But clover.
Not just the gorgeous annual crimson clover (Trifolium incarnatum) [see May 11 post] which I planted as a cover crop last fall, but the ubiquitous white clover (T. repens). I even saw it at the base of the post holding the sign announcing I was entering the Alpine Lakes Wilderness, like us humans it knows no bounds. That’s not necessarily why I like it, but I don’t have a clear answer. Certainly nostalgia plays a role. Nostalgia for a time when I didn’t know a weed from a rose. Nostalgia for summer days lying on the lawn tying clover flowers into chains and wearing them as crowns. Or lying on the lawn snatching clover heads from honeybees and eating them imagining myself a goat, or in more exotic moods a gnu. Then my step-father moved in and banished the clover from the lawn with a few graceful sweeps of weed and feed. It seems my weedy youth and honeyed innocence vanished then too. Maybe it is this sense of innocence which clover revives in this old goat that makes it so dear. Certainly the moniker “weed” implies anything but innocence. And I try not to see them as weeds even though weeds they are and pull I must.
Though as I grow old, more philosophical and less religious I can’t help but note the some sort of magical religious quality to the three leaves ( tri-folium) of the little clover. Considered a plant of Venus in earlier times it was a token of hope, later the leaves were considered to represent the Holy Trinity. And the luck afforded to those, usually in the form of happiness, who found a 4-leafed clover is legendary. And to be “in the clover” a state of abundance. I’m sure to early people having a field of nutritious clover meant more milk and fatter calves and thus a sense of felicity.
I’m happy to be living in the country where clover grows unchecked and is the least of our weedy worries. On our little 7 acres we have 5 species of Trifolium, none of which are native. Arthur Lee Jacobsen, in his book Wild Plants of Greater Seattle rues the loss of native clovers. He estimates there were about 8 native species of Trifolium in the area before the introduction of European species, both deliberately and accidentally. Both red clover (T. pratense) and white clover ( T. repens) were most certainly introduced as fodder and honey crops and are still used to this day for that purpose. The tiny and noxious little hop-clover ( T. dubium) and large hop-clover ( T. campestre) and the pretty and less invasive rabbitfoot clover (T. arvense) were more than likely introduced in hay that was used as ballast in ships arriving from Europe. Like us they are here to stay.
Of the over 300 species of clover world wide, there are according to Hitchcock and Cronquist in their Flora of the Pacific Northwest around 40 species and varieties, both native and introduced here. When I talk about clover I am talking about the genus Trifolium, there are many other legumes loosely referred to as “clover”, which are not true clovers. A few of those have made it onto our property, too.
It is hard to find anyone recommending clovers for the garden though. Bob Lilly recommends 4 in Perennials: The Gardener’s Reference. Of these the only one I’ve seen readily available is the purple 4-leafed clover ( T. repens “Purpurascens Quadrifolium”).
I wonder how much luck can be plucked from a clover that has only 4-leaflets on every leaf? I have no doubt though that I have inherited the 4-leafed clover gene from my grandmother, who I can still see standing in a clover studded lawn casting her gaze like a rotary sprinkler then diving in to snatch a treasure. Her Bible was cluttered with the pressed leaves and she would often include them in cards especially Get Well cards. This year I have found about ten in our little 100 square feet of white clover. It must be the weeders eye that can scan all that green and select just one leaf, one exceptional and lucky leaf from the many. I guess all the weeding I do is paying off in 4-leafed happiness. I certainly know I’m lucky enough to have one of my favorite plants growing just about everywhere I go.
Here are a few from the valley: 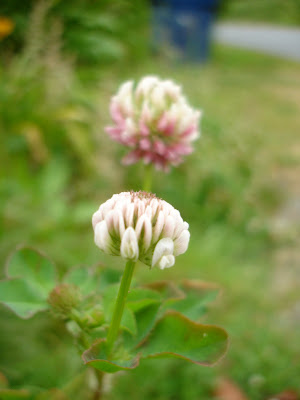 Alsike clover (T. hybridum) once considered a hybrid of red and white clover. 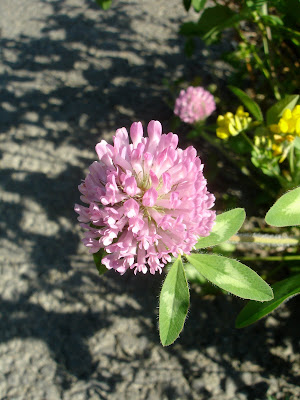 Red clover (T. praetense) seems purple to me. It grows right along the black top of our road, never wilting, even on the hottest days. 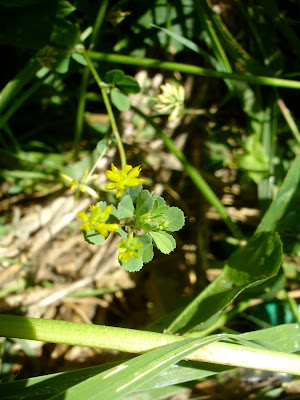 Little-hop clover (T. dubium) is easy enough to over look in the vast matirx of weeds here. 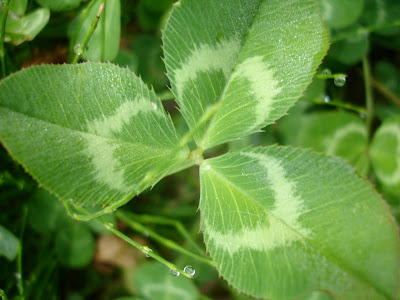 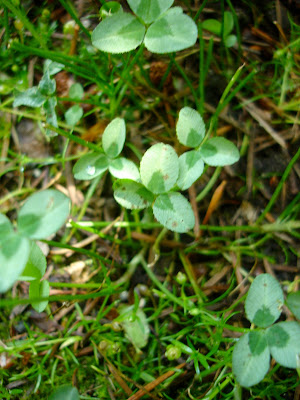 In “Green Ice”, a selection of white clover growing in my friend Jon’s garden, the halo extends to the edge of the leaves creating a silvery aura. 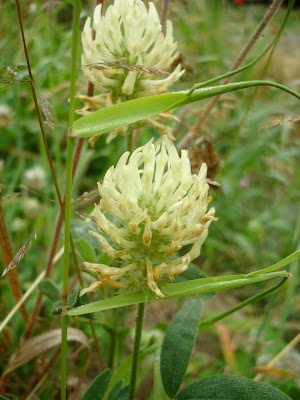 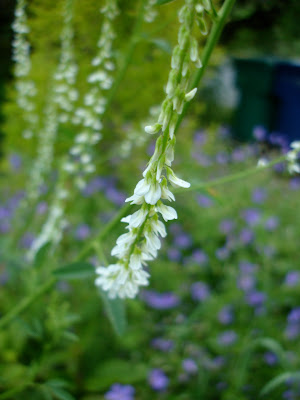 White sweet-clover (Melilotus albus), not a true clover, seeded into out garden for the first time this year. If it wasn’t a weed I’d bet it would be in more gardens. Statuesque and long blooming, it is a real beauty. 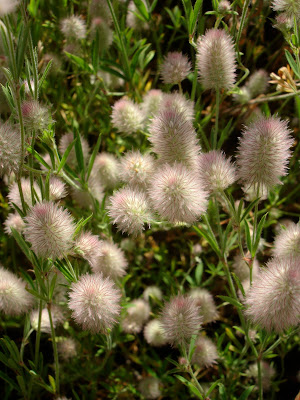 Rabbitsfoot clover (T. arvense) forms smoky mounds along the side of the highways this time of year. Another one I dare not plant but can’t help but admire. 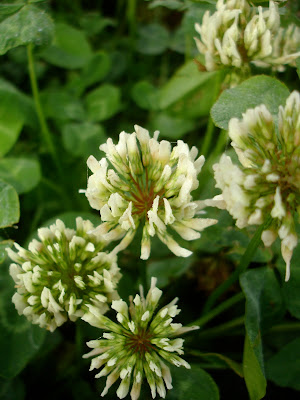