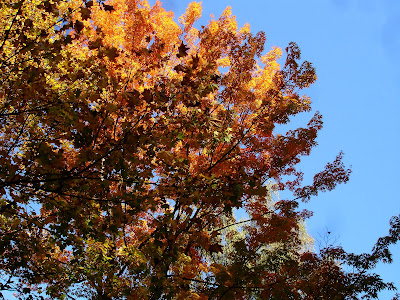 I know the orange assault of the sugar maple has only begun, but I can’t help but think of spring. I’m planting bulbs this weekend. And just the other day when I entered the greenhouses a Molbak’s Farm I was overwhelmed by the scent of violets, the sweet elusive fragrance vanished quickly. But not it’s impact. I was standing in a house full of warm sunshine and 1000s of winter pansies. It didn’t smell like fall at all. No crisp vinegar of rotting apples, no burnt sugar of katsura, or marigolds’ persistent pungency. It was the sweet scent of spring. Or the faux spring of my youth when I visited the temperate dome at the Mitchell Park Conservatory around Valentine’s Day. The streets outside would be crusted with months of old snow, but inside newly planted and replete with pansies and bulbs we got a glimpse of spring.
I grew up in a place where winter pansy was an oxymoron. So when I arrived in Seattle 22 years ago and saw pansies for sale at the grocery store in November I was shocked.
Shocked and delighted. I love pansies. My excitement about moving to the Northwest trebled as I put the little blue 4” pansy into my shopping cart. Yet I was both doubtful and hopeful. 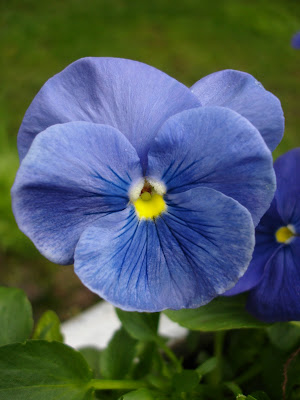 Until a few months later when the north winds flew in with fists, like a master boxer, flattening my winter pansy. Down for the count, I had little hope and abundant doubts about winter pansies. Yet with the first warmish days of February it was up again. It was perched so carelessly on the window ledge, god knows I was doing nothing to help it along. I am a cruel lover.
Then a February snow floated in like a butterfly and stung like a bee, taking the wind out of my hopes completely. My little blue pansy, I had chosen “Crystal Bowl True Blue” for it’s stunningly icy purity, lied bruised and prostate over the edge of the pot.
Not all pansies are winter pansies. Maybe I had been duped?
Most pansies fitting into the inter specific hybrid Viola x wittrockiana, named after the Swedish botanist V.B. Wittrock who studied them extensively, are the progeny of three european species. V. tricolor, V. lutea and V. alaica. The enthusiastic hybridizing which began in England in the 1820s, made pansies one of the most popular annuals.
Though botanically speaking all pansies are Violas, not all violas are pansies. Some sources say the difference lies in fragrance, pansies have it and violas don’t , carrying more genetic information from the scentless V. tricolor. Another source says that pansies have a black velvety splotch in the middle where as violas don’t. I asked a friend at Wells Medina Nursery, who said, “We call the little ones violas and the big ones pansies.”
“ A rose by any other name...” I replied. 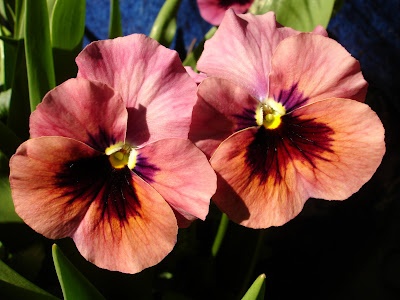 Nomenclature and botany aside, I love them all. And their persistent popularity, almost 2 centuries, is proof that I am not alone. With over 70 names in English they have endeared people as much as dogs or cats. Of these names “pansy” , from the French pensee meaning “thoughts”, seems to have stuck. Thought, one author speculates, because it is “ the noblest faculty with which mankind is gifted”. My Aunt Lottie had her own take on it, she found their pinched little faces charming aggravated with thought. “Heart’s-ease”, a name that appears as often in older literature speaks to the calming effects of the fragrance and it’s attribution to Saint Valentine. And I must admit they do do something to my heart that feels quite a bit like ease.
By April of my first year here, my seemingly limp-wristed pansy, like the effeminate boys it lends its name to, proved to be tough. Came out swinging. As winter was lead from the ring, my little winter pansy was crowned with a victor’s bouquet of blue. This same triumphant nature has inspired British artist Paul Harfleet to develop The Pansy Project, an ongoing installation to bring awareness to homophobic abuse.
And to spread the love of pansies. Sometimes as orange as maples 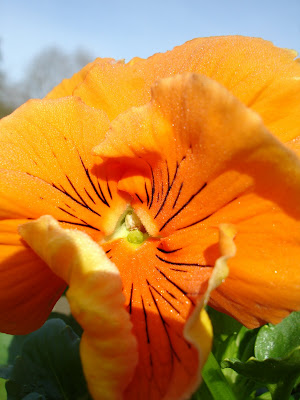