The first snow flakes of the season appeared last week. Graphic snowflakes on the little weather calendar in the newspaper foreshadowing a cold front, and yes, snow, on the way. Everyone was excited. If I, like mother says, had a nickel for every time I heard the word “snow’ I could have quit working by this week. Instead I’m laid-off by snow. Not the wordy, chattery snow that spews from everyone’s lips when the forecasters start mentioning snow, but actual rain-turned-into-ice-crystals snow.
Just days ago I made a little square of my left forefinger and thumb, and right forefinger and thumb. I looked through it like a photographer at a portion of the garden that could have been spring. I framed a sasanqua camellia, an apple tree still full of green leaves, fuchsias and one erratic rhododendron covered in pink flowers. There was not a hint of Fall’s changing leaves or decay. It was a scene as fresh as May. But it was November 17th.
Fall can be that way here. Langourous. Not in a hot tropical way, but in a confusing abundance of color from the changing leaves and the newly blooming flowers. From temperatures which don’t quite reach freezing and yet stay warm enough to keep dahlias in bloom. Not to mention fuchsias, camellias and rhododendrons. And provide cucumbers and zucchini into November. I find myself rather flummoxed during these months. Do I cut back the dahlias when they’re still half-heartedly blooming? Do I let all the nasturtium seedlings that are popping up in abundance and growing with Spring-like vigor go until they freeze? Or get the work over with now? Can I validate staying in and reading all day on a Saturday which is only cloudy and 55 degrees?
So last week when I was thinking it wouldn’t snow, “Just more meteorological exaggerating,” I couldn’t help but wish it would snow.
You see, I love snow. The more the merrier. I love a city muffled, tongue-tied. Traffic at a stand still. These snowy days are the real holidays, no Labor Day Blow-out Sales, no New Year’s Eve Galas, or Easter strolls through the Arboretum, en masse. I do feel sorry for the people who collide, spin-out and slide off icy roads. It’s no fun. But what does it hurt if everything shuts down once in a while?
But more than anything I love a world swathed in white.
A few years ago, as a Christmas present to myself, I went to see the Vedic Astrologer Dennis Flaherty. I am a sceptic. So I let astrologers go on without giving any cues. Let them damn or vindicate themselves. I was quite surprised how precisely accurate he was. By the end of my session Mr. Flaherty was vindicated. And I had a new color: white.
Now, I’ve never been a big fan of white. To me it’s not even a color. But the insightful astrologer insisted it was my color, when he saw a puzzled look creep on to my face. If he would have said red or yellow, I would have agreed whole-heartedly. If he had said green or blue I would have assented. But white? I had no feeling for white. It rouses neither anger nor happiness; neither comfort nor excitement in me. Maybe he wasn’t such a great astrologer after all.
But I kept what he said in a secret part of my heart.
White.
White?
Why not white?
I’m a gardener and, like Pig Pen, a perpetual cloud of needles, leaves, dirt and rocks- yes, once I took off my shoes at a friends house and a rock fell out- follow me everywhere I go. White surfaces, white clothes are my nemesis.
But that’s not why I don’t like white.
It’s been three years since Dennis Flaherty told me my color was white. I’ve been looking askance at white ever since. Asking white to prove itself.
I guess I’ve always been intimidated by the imperiousness of white. Wedding dresses. The white-glove-tests. Porcelain. Jock socks. Snow White ( the Disney Classic). Ambulances. Clapboard churches. Linens. The absolute perfection of a hen’s egg ( I usually buy brown ones).
The White Album.
The blank page.
So lately I’ve been trying to create a blank space for myself to re-address white.
Trying to look at the white that I like instead of white that scares me. It began with those first graphic snowflakes last week. They reminded me how much I love snow and, well, snow is white.
So I began a list:
Sugar cubes.
Madonna lillies.
Bone china.
Swans; mute, trumpeter and whistling swans.
Paper bark birches, especially Betula papyrifera and B. utilis jacquemontii.
Ghost brambles (Rubus lasiostylus hubeiensis)
And, snow, even when it covers the beautiful golden-orange decline of fall. 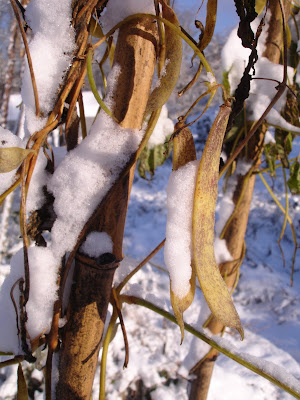 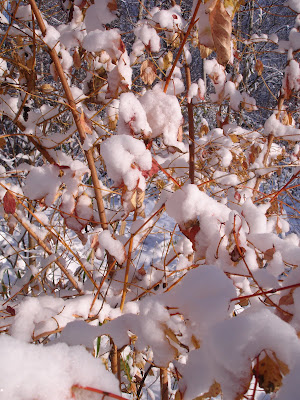 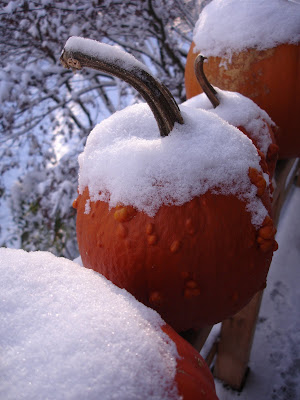 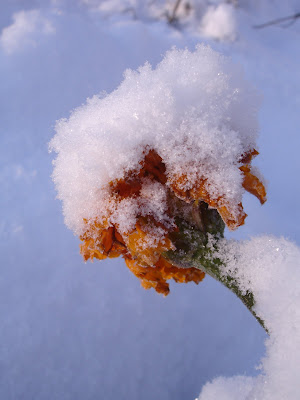 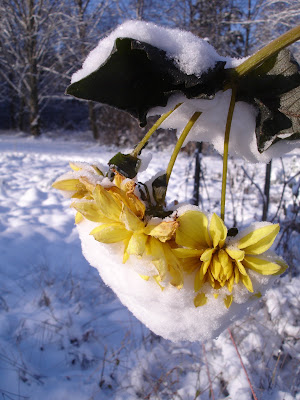