Elba is an ancient piece of earth moving slowly away from the Italian mainland along with the other islands of the Tuscan Archipelago. It has a long history of human habitation, dating back to the stone age. Every great mediterranean civilization has tried to hold it, because it is rich in minerals gems, and most importantly iron. The iron mines are closed, but the beaches are open. Nearly 4 million tourists visit the island each year, primarily for the spectacular landscape and beautiful weather. The island is nearly all mountains and sea shore, with a small stretch of plain in the center. I came to Elba to work on a garden, il Orto dei Semplici Elbano, a small botanical garden devoted to the plants and horticulture of the island. I had started working there 10 years ago and have not visited since. I was happily surprised to see Il Parco Nazionale Arcipelago Toscano, had a stronger presence and the wild parts of the island felt wilder, freer than I remembered. This means a lot to an American, especially one form the Pacific Northwest, where there is so much wilderness. As much as I like to see progress I like to see regression. As much as I enjoy the wealth of history on the island, i like to know nature is taking over. Holly oak ( Quercus ilex ) forests once dominated the island, decemated for building and burning, especially on the eastern end of the island, and kept from returning by grazing. Oaks had notably returned, wildlife , in particular birds seemed everywhere. And because it was October tourists were scarce. I could hike the mountains alone for hours and soak up the splendor. Here are a few photos to give you an idea about why I returned to this place. 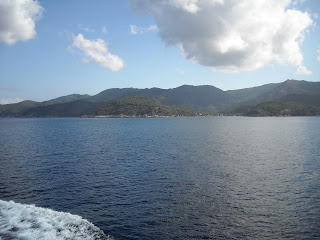 The island rises out of the Tyrrhenian Sea and reaches heights quite quickly. 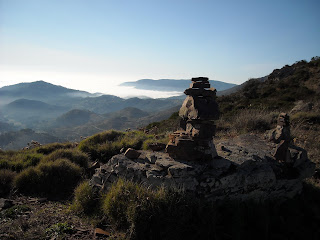 The scirroco blew in fog and the fragrance of Saharan sands lingered in the air. 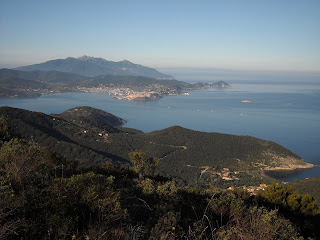 A view to the east from Monte Strega. The city is Portoferraio, the main city on the island. The mountain behind it is Monte Capanne, the largest on the island. It has it own unique flora near the peak. 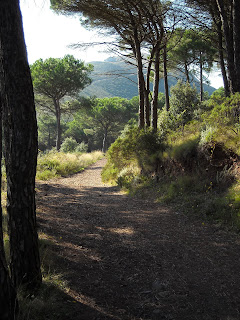 A walk under the pines (Pinus pinea) Somebody had already eatten all the pine nuts.
Posted by Daniel Mount at 7:42 PM
Newer Post Older Post Home