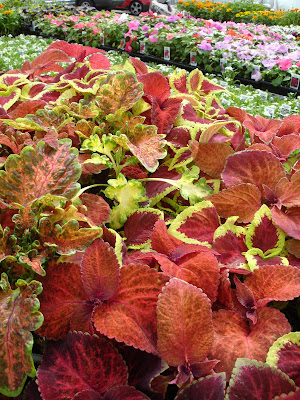 When I was at Mc Lendon’s , my favorite hardware store, on Wednesday the parking lot was in full buzz. The sunshine on the black top gave the day a summerish sizzle. The tomatoes had arrived. People love their tomatoes. And marigolds and geraniums, and coleus.
As I stood in front of a cart of coleus and geraniums. A woman in a bright orange blouse approached and said to her friend “Coleus!” I’m sure if she was writing this she would follow the word “ coleus” with more than one exclamation point.
The she asked her friend, in her outside voice, “ I wonder if it’s too early to put coleus out.”
I couldn’t help but chuckle at the folly and responded, “It’s way too early.”
She gave me a dirty look, that said “ Spoil sport!” followed by multiple exclamation points.
I slunk off to befriend a lonely cart of pansies.
Later as I stood in the long line to check out, I balanced an ax, a rake, a pot of tarragon and one orange pansy. I had plenty of time to be nosy about what all the other shoppers were buying. Tomatoes, geraniums. And coleus. I was so October with my little orange pansy. I felt strangely out of synch with humanity. So when I reached the cashier I tried to rejoin by joking, “There sure are a lot of tomatoes going out of here for mid-April.”  The over-worked and unamused clerk responded defensively, “They probably have greenhouses to keep them in.” Knowing in the nursery business “buying early” and “buying often” go hand in hand, I slid my card. Typed in my pin. Juggled my purchases back into my arms. Smiled through my obedient “Thank you” and headed back into the sun.
I remembered a February years ago when a friend was handing out tomato seedlings started way too early. I took a few of the pale leggy seedlings home and planted them outside on Valentine’s Day in honor of their old German name Liebapfel, love apple. When I told my friends they all chuckled at my folly. Luckily the frosts had ended early that year, so the tomatoes didn’t die but they sure sulked. When June finally came the tomatoes started to grow in leaps and bounds and by the end of summer I was in abundance.
I know it is spring not because the tomato plants have arrived at the hardware store, or because one day it is sunny and the next cold and rainy, but because I am so busy. Every step must be a step forward. No slacking, no back tracking. I run this course each year like a benefit marathon. I look toward the goal, hammock and heat, a beer, a book. Tomatoes.
My next stop, on Wednesday, was at a less frenetic wholesale nursery. One of the employees greeted me and then asked, “When is spring going to get here?”
As I stood in the heady aroma of a nearby cart of alyssum and looked at the blue sky over his head, I said “This is Spring.” No exclamation marks necessary.
“ I guess you’re right,” he responded and then a small smile came to his face, as if spring had entered him with my words.
In the afternoon I stopped at the gas station to tank up and ran in to get a quick cold drink. Something lemony and sweet felt in order that day. When I checked out the clerk said, “ Summer is finally here”. I wondered where he was from that he could delude himself that a 70 degree day in April was summer’s arrival.
Then I responded, “ Sure seems like it.” And joined him.
The rest of the day I made believe it was summer. I took a walk to no where, sat on the front porch with my friend Gretchen and watched passers by. I had a Miller High Life with dinner and just relaxed a bit. I cast off my notion that the demands of spring are reward by the pleasures of summer. And lived a “ summer evening” in April, which began my craving for a tomato sandwich.
So this weekend we need to clean out the greenhouse. 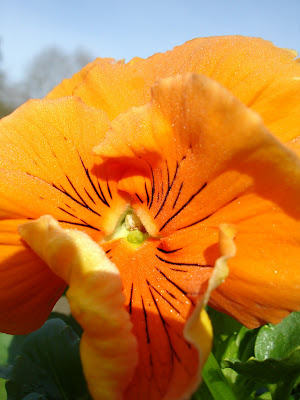