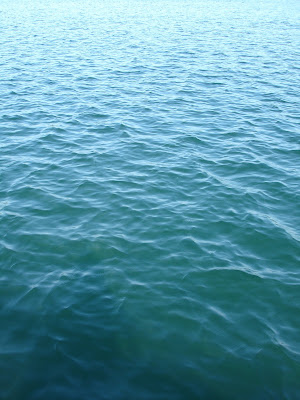 As I flew from Chicago to Green Bay, Wisconsin over a week ago, I sat next to a businessman and rancher from Austin, Texas. The safe topic of weather came up. I hadn’t realized the West Texans were without rain for the past 18 months. He seemed worried as he told of friends’ wells running dry, of having to buy and truck in water and hay to keep their stock alive. When we were about half way up the coast of Lake Michigan, just over Sheboygan, he broke from the conversation and looked out the window at the vast expanse of blue.
“Is that fresh water?” he asked.
“Yes,” I answered.
The wistful look on his face could not hide the gears of a businessman inside. Was he dreaming or scheming? Certainly he was craving just a sip of that vast watery landscape.
When I finally reached Iron River, Michigan, and my parents’ farm, I relayed this conversation to my mother who grew up in Texas and always has a deep affection for the place. But she has lived the latter three-quarters of her life near the Great Lakes, so she became defensive, telling me Canada and the U.S. had made a pact not to sell the waters of the Great Lakes. Already years ago there was plans to build an underground canal to bring the abundant waters of the Upper Midwest to the arid Southwest.
The Upper Peninsula of Michigan is suffering it’s own drought this year. Yet on the first morning when we woke the dew was so heavy our shoes were immediately wet when we stepped into the grass. A baffling sweetness filled the air.
“ Sweet like flowers,” my mother said, though the nearest flowers were the scalding red zinnias around the front porch. 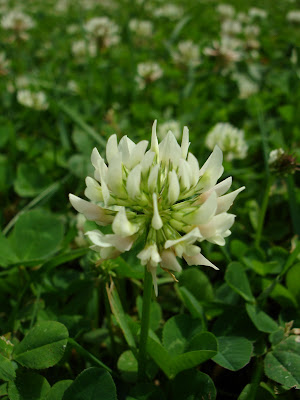 Then we looked down to the clover pocked lawn.
“ Maybe it’s the clover,” I said, though it seemed the scent was much grander than what those little white flowered weeds could emit. 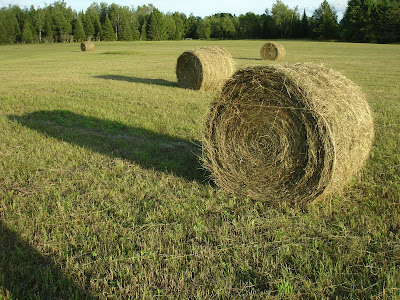 The dry weather had been good for haying and the fields had just been mown, the hay rolled. But the sweetness was beyond fresh cut hay or clover. Was it the smell of August? The nearly sub-alpine quality of the air at my parents’ farm, which my mother always jokingly calls “ Windy Acres”, was astir with breezes as usual, transporting the sweetness and disguising its source.
I thought how wonderful this sweetness must have seemed to early people who did not live in the soda-poppy, frosted-flaky world that we do. Michael, a biochemist, says that sweetness is the first craving and the first addiction. I‘m sure we all remember spending our first pennies, or quarters depending on how old you are, on candy. Sweetness is a metaphor for all that is good in life. Maybe what we were smelling that day was the joy of our reunion.
We walked to the vegetable patch in our dew soak shoes. My mother, so proud of her poppies and disappointed in her corn, and my dad, making a point of showing me his giant pumpkin which was still under 3 inches, could not understand my excitement over the huge swath of blooming dill they left grow among the beans and tomatoes.
“I rip it out like weeds,” my mother said. She always has as I remembered.
I love dill and yet never seem to be able to get it to grow for me here in the Northwest. I plucked a ferny leaf and popped it into my mouth. The bitter greeness filled my mouth giving way to a sweetness. An after taste? Or a memory of youthful hours in my mother’s garden and the vinegary evenings of pickle making after dinner?
Later that day I dragged out the hose and watered the garden, watching the gophers eat the green opium poppy heads and then head to their burrows to nap. Iron County, where my parents live, was voted the best water in the state of Michigan a few years ago. I can attest to it, I can’t keep myself from drinking glass after glass of the sweet artesian purity. I attribute it to my parents good health.
A few days later I woke to cravings. Cravings for sweets. So I dressed quickly and went outside before breakfast. The jubilant gossip of the sandhill cranes which always remained at a distance, suddenly broke overhead as they swooped over the garage, their wings nearly touching the roof. The air was so lovely, moisture clung to everything like survivors after a shipwreck clinging to debris. The rain the forecaster promised missed the farm again. The sugary dew would hardly suffice. My parents would have to return to their watering, as my visit was ending.
As I drove down M189 through the rumpled post-glacial landscape veiled with a pelt of sugar maples and pot-holed with little lakes, the first hushing melancholy of Autumn overcame me. Some drought stressed maples along the road blushed an October copper. I shooed crows from the black top with my rushing vehicle. Time was passing with the fog sliding off the morning. Everything transpiring, everything expiring.
When I left Seattle it was still in the 90s and we were at the tiring end of a dry spell. Returning to gray skies and rain was sweet. Not that I don’t like sunshine, or live in a flood plain with a seemingly limitless well, but rain, magical rain, beyond what science can describe, is incredible. I don’t think I could have said that last February, nor can I fight off the bitter sweet twinge of melancholy as summer slips back a bit revealing the first glimpse of fall. The frenzy and anxiety of watering has subsided, the lushness I had sought with frequent waterings suddenly emerges after the rain. The plums swell and ripen, the cabbages head up, the cucumbers lengthen in mere hours.
On the first day I was home, I stuffed some of these rain swollen cucumbers with green dill seed heads I had collected in my parents’ garden and tenderly packed in my luggage, into quart jars. I boiled a salty brine, filled the jars and went to bed. I fell into a restless yet heavy post-travel sleep, realizing all the watering would now be replaced with harvesting.
And trying to remember the recipe for sweet pickles. 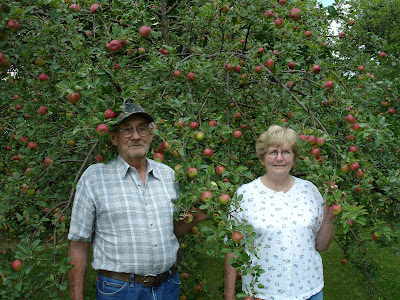 My parents with the apple "State Fair", the youngest tree in their orchard with many trees over 100 years old. They actually eat an apple a day, keeping them spry.
Posted by Daniel Mount at 9:57 AM
Newer Post Older Post Home