THE FUCHSIA IS NOW

The only fuchsias I saw growing up were in conservatories. I wrote them off as being “too ornamental”. The names like ‘Pink Marsnmallow’, ‘Danity Angel Earrings’ and ‘Bouffant’ will give you an idea of what I mean. But when I moved to the west coast and discovered the hardy fuchsias, in particular Fuchsia magellanica and it’s cultivars I was smitten. I could overlook the fussy looking hanging baskets and head right to the nursery to get my fuchias. Of course it didn’t take long before I was seeking out the fuchsias that were marginally hardy, mulching with straw, dragging pots into the basement and generally worrying. This summer really gave me a scare when the extreme heat stopped flower production and generally made my fuchsias look weak. But now that our famous cool moist air has returned so have the fuchsias and without a frost we could have them until November.
Fuchsias are in the Onagraceae, or primrose family. There are between 100 to 110 species, most of which are tropical or subtropical. They are primarily found in Central and South America. The hardiest F. magellanica grows as far south as Tierra del Fuego. There are also 6 species distributed through out New Zealand and Tahiti. This explains their propensity for greenhouse culture. There seems to be only guesses at the number of cultivars world wide, ranging between 5000 to 8000. Most are crosses between F. fulgens and F. magellanica are now referred to as F. x hybrida, the parentage becoming blurred from the enthusiastic interbreeding.
I am particularly lucky to live in the Northwest and to have a client whose garden is well situated for hardy fuchsia cultivation. Here are some of my favorites: 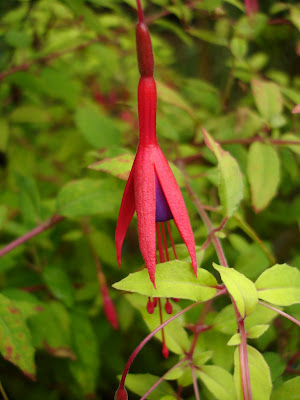 Fuchsia magellanica var gracilis 'Aurea' has performed incredibly well in a very sunny border that tends toward dryness, not usually recommended for fuchsias. It's startling yellow foliage sets off the red and purple flowers. It often winters over without die back, though when it doesn't it shows no reluctance to grow vigorously from the roots. 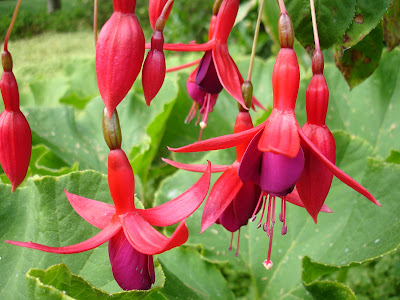 'Cardinal' was sold to me as hardy. I have my doubts. It absolutely flagged in this summer's heat, I was ready to pull it out. Luckily I didn't, it is now over 3 feet tall and heavy with flower. 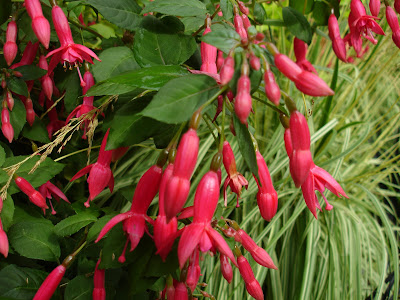 'Leverkusen' is a new one in the Northwest, with promises of hardiness. We will see. I bought it in bloom in April and it has not ceased since. It also did not like the heat, dropping flowers and looking fatigued. It bounced back remarkably though and shows no sign of giving up. The cerise flowers packed densely make an incredible display in a half shady corner of my client's garden. 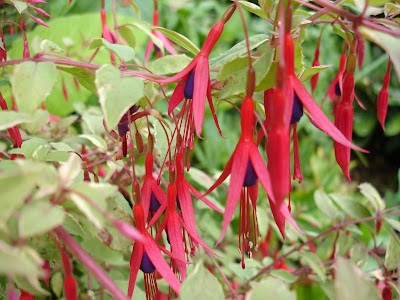 F. magellanica 'Variegata' is another super hardy one with great foliage setting off the scarlet and purple flowers. It reads very nicely from a distance in one of the more expansive parts of the garden. 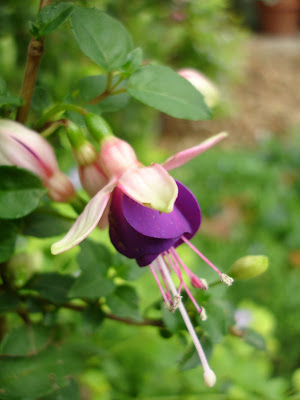 'Lambada' is a lovely fuchsia possibly hardy with mulching. Though listed as heat tolerant and a prolific bloomer by The Earthworks Fuchsias, it was reluctant to grow or bloom in the summer heat, now it sends out new growth and plenty of flowers. A month after the party , of course. 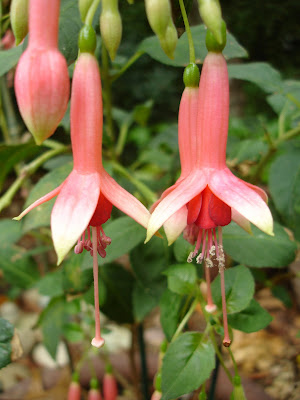 This is 'California' the only fuchsia I need. The combination of flamingo pink and coral is cheerful without being insipid. The guys at Joy Creek Nursery in Oregon, a great source for hardy fuchsias, said it was hardy for them. This is one I love too much to put to the test, I'll drag it into the cool greenhouse for the winter.
Posted by Daniel Mount at 7:27 AM
Newer Post Older Post Home