INA RUSH, IN A RUT 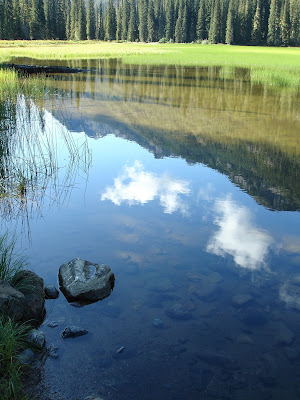 I am a “cheater”. Last Tuesday when everyone else was rushing back to school or the grind-stone, I fled to Tucquala Meadows. My reliable retreat from the work-a-day world. All the campers had left the valley. And the rain too, leaving the valley washed and puddled, and cool. This was my little cheater’s holiday getting the whole valley to myself. Selfish I know but I wanted to walk into Fall naked, not literally of course. I know I am rushing things as usual calling the day after Labor Day the beginning of Fall. I know Fall officially starts on September 22. But Fall has really started. The meadows once a pointillistic constellation of colors have gone brown except for the occasional aster or golden rod, tardy and resplendent. 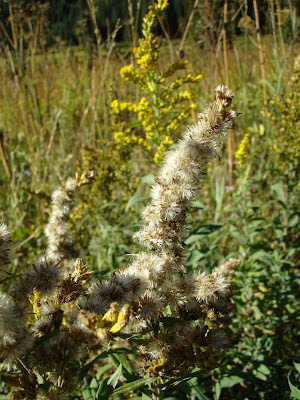 Convinced this was the start of something other than school. I wandered through the meadows collecting seed for next year’s garden, and taking pictures. 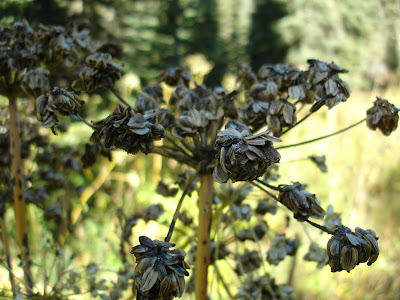 One August I came to the valley for a week long camping, botanizing and photography retreat. I didn’t realize I had packed my camera with a dead battery and no back ups. I kicked myself repeatedly the first 24 hours, believing the meadows were more beautiful than I had ever seen them; I was pissed as I watched the long shadows of late summer slip across the canyon-like valley. I felt deprived of my tool. My weapon. No way to grasp this beauty, no way to bag it. I calmed down as the week went on, succumbed slowly to my liberation. I began seeing the glorious valley, it’s meadows, mountainous walls, and the slithering Cle Elum River, not as a series of snap shots but as a living environment. It ended up being one of the most beautiful weeks I spent there. And I don’t have a picture to show for it.
I’m not against taking pictures. My point-and-shoot is my favorite toy right now. Yet I wonder sometimes if I’m taking too many photos, a pick-pocket in a crowd. Always looking for the next dollar. No one safe. Nothing sacred. The Native Americans were reticent to have their pictures taken, saying their souls were also taken in the process. How soulless have I become in this rushed state of point-and-shoot pilfering. And yet I love photography, and photographers like Hans Georg Berger, Lorry Eason and David Perry, whose blog has taught me more about using my point-and-shoot than the manual that came with it or any of the classes I’ve taken. In particular it was his post about making vs taking pictures which has really made me stop to think.
I wish I had his saint-like patience for set up, or that gentle waiting for the right light that is so obvious in many of his photos. As the Artful Dodger I find myself forever in a hopeful state that one of these taken pictures might actually be a photograph. I am looking more, thanks to David, not only at the shimmery light-lacquered surface of things, but also the impenetrably black shadows eating holes in things. 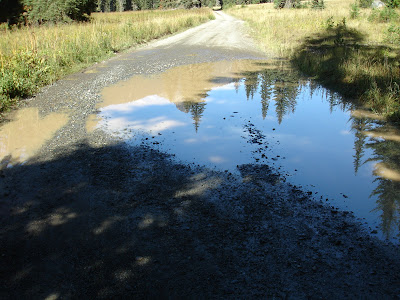 So when I looked into the shiny puddles nestled into the rutted road, I realized their depth, their meaning, was not in how much water they carried but in how much light they reflected. They held the majesty of the trees and the vast blue sky in mere inches of mud fouled water. Certainly I can do as well with my complex little point-and shoot, or even better with this thing I call my life.
Posted by Daniel Mount at 11:34 AM
Newer Post Older Post Home