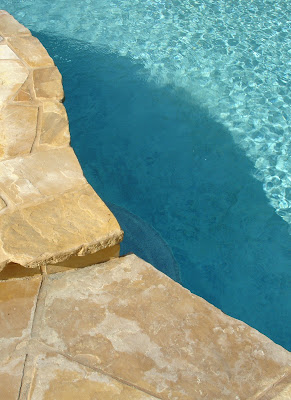 I love orange groves, and cabernets. I love swimming outdoors in mid-October. I love pods of sea lions herding schools of sardines into which pelicans dive under the Golden Gate Bridge. I love to drive, and better yet to be driven. I love the dusty coastal smell of the peninsula south of San Francisco. Michael calls it “smoggy”, redolent with childhood memories both sweet and acrid. I, liberated by not having any childhood associations with this smell, find it “exotic” almost surreal. California is surreal. At least to me. How can someplace be so beautiful and grotesque at the same time? Like an attenuated super-model? So appealing and so repelling?
And yet the pleasures: a cabernet buzz, David-Hockney-braided-blue-shadows on the bottom of the pool, the Perfect Temperature. I guess I still have too much of the Wisconsinite in my flesh, in my very bones. “This won’t last.” Even know I can hear the slow silent movement of the tectonic plates. Yes, I cannot “chillax”, as the Californians say. Too much nordic inbreeding, I guess, making me the blond-haired, blue-eyed “monster of doing” that I am. 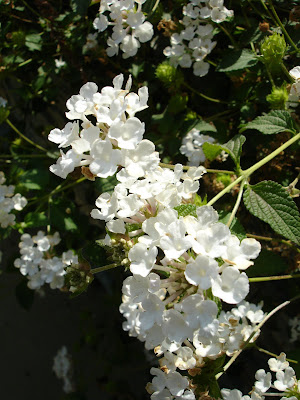 But, ah, the pool, the 80 degree lemon laden days.
Ah, the bloody cabernets. And lantana lolly-gaging over walls in non-stop bloom, and tibouchina flowering freely with no threat of frost. It seems like paradise. But maybe like Adam, Paradise isn’t enough for me. I am not enamored, like the Beach Boys with an “Endless Summer”. Still a wistfulness came over me like an 19th century consumption when we left California last Sunday. We were stepping out of our delusion that summer wasn’t over, and into the “dark” north. Frost had taken the dahlias, and basil and field grown tomatoes (the green house tomatoes are still going), while we were enjoying ourselves in that place that always feels more foreign to me than India. India actually felt strangely like home when I visited it two years ago.
I welcome the clouds and the rain. As the clerk at the Redmond gas station said, “We’ve had a good run; we can’t complain.” I wanted to complain, but I realized I love change. I voted for change. Maybe I also love the end of summer, fearlessly love the wistful melancholic celebration that is Fall, flushed orange moving toward skeletal. I am not afraid of the dark, looming tide-like and threatening on either end of the shrinking day. Not as afraid as I am of California, don’t ask me why. 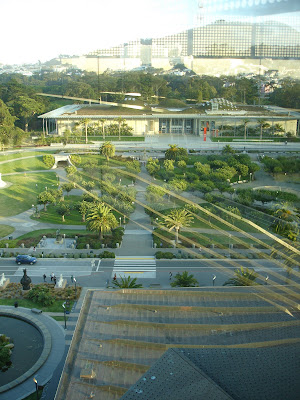 The view from the tower of the De Young Museum in Golden Gate Park to the newly planted living roof of the California Academy of Sciences takes on a surrealistic feel, distorted by long evening shadows, an eagle's perspective, mirrored glass and a cabernet hang-over.
Posted by Daniel Mount at 11:34 AM
Newer Post Older Post Home