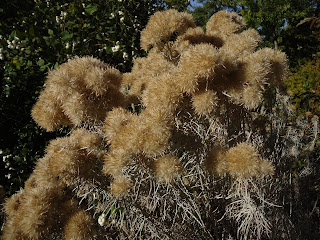 Last weekend Michael and I drove to Boise, Idaho for his parents Golden Wedding Anniversary. It’s a beautiful drive, that we take frequently through the Cascades, the sage lands of the Yakima valley and the Blue Mountains of Eastern Oregon. This was the first autumn trip we made. I was surprised by the colors.The cotton woods in the river valleys were golden, with that yellow between egg yolk and lemon rind that we call golden. The slopes were reddened with sumac and service berry. Yet the dominant vegetal color beneath the clear blue October skies was beige. Almost a non-color in its ubiquity and neutrality. The grasses were beige and every form of herbaceous growth, the flower head of shrubs like the rabbit bush (Chrysothamnus naseosus) above and the stubbly fields of harvested wheat. It’s an affable if dead color, not cheery like spring time pinks, or bold like autumn gold, but valuable and calming. Or maybe it was just the long ride in this sublime beige landscape that calmed.
Posted by Daniel Mount at 7:32 PM
Newer Post Older Post Home