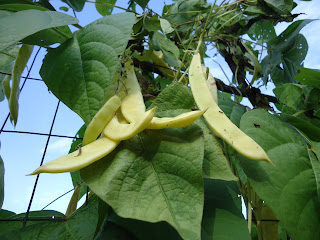 This weekend we had a sunny day. Michael and I were rushing around the garden gathering the last of the gatherables before the next swath of rain passed through. A few pears, a few pumpkins. And even some beans. I bought the seed for this yellow romano bean in Lucca, Italy a few years ago. It’s called Meraviglia di Venezia, the Marvel of Venice, for a reason. The first year we grew it we was totally disappointed with it’s slow growth and reluctance to produce. But then late in the season, when the rest of the beans had given up it began to develop these beautiful and tender yellow pods. Again this year the late harvest was marvelously rewarding. Its a bean we will grow again and again.
Posted by Daniel Mount at 7:33 PM
Newer Post Older Post Home