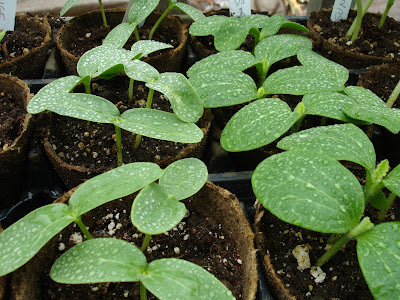 Everyone loves tomatoes.
There are tomato taste tests, cook-offs, blogs and chat rooms.
One survey says that tomatoes are the most frequently home grown vegetable. Nearly 85% of all home gardeners grow tomatoes. I may be wrong but ask just about anyone what their favorite vegetable is and they’ll say most emphatically, “Tomato.”
Ask me and I’ll say most emphatically, “Cucumber.”
To me it is the ultimate summer fruit, they are after all like tomatoes a fruit. Though I love to eat them pickled, there is nothing like a cucumber in one hand and a salt shaker in the other on a hot summer day. I’ve read there is actually a 20 degree temperature difference between the outside and the center of a cucumber. Thus the “cool as a cucumber”. They are also about 95% water, so on a hot day with a little salt they make a marvelous re-hydration snack. Unfortunately they are relatively low in nutritional value having modest amounts of protein, fat, minerals and vitamins B and C.
Yet Cucumis sativus has been cultivated with love for over 3000 years, starting in it’s native India and moving westward with civilization. It was grown in the New World only two years after Columbus’ first landing and was quickly adopted by Native Americans. Though the fruits are rather phallic, herbalists have attributed this fruit “ruled by the moon” with the feminine qualities of cooling. It has long been used in cosmetics. My sister used to apply cucumber slices to her eyes, to which my mother would cry , “That’s a waste of a good vegetable.”
Yesterday I transplanted our cucumber starts into the field. We have finally narrowed it down to 4 cultivars after 3 years. Our favorite is 'Poona Kheera' an heirloom cucumber form India which produces well here even in our cool summers. The skin turns an ugly crackled brown color when they ripen but the flesh is white and sweet and crunchy. I haven’t tried pickling these yet. For pickling we grow a variety called 'Delikatesse'. We also grow 'Satzuki Midori' which I reluctantly allowed in our cucumber patch a few years ago. I was never impressed with the Japanese cucumbers I bought either heavily wrapped in plastic or waxed to keep them fresh. “ Overpriced and overrated,” was my assessment. But Michael, insisted so we planted some. They are miraculous fresh from the vine even the forest green skin has a delicate fresh taste and I will not have a summer without them now, except last summer which lacked heat and Suzuki Midori. I’m trying one new cuke this year ' Jaune Dickfleischige'. Michael swears I ordered it for the name alone. But my favorite seed catalogue Baker Creek Heirloom Seed had me convinced with their description ending with: “Rare!” So I had to try it.
The other thing that is rare to find in American gardens is the Mediterranean native, squirting cucumber (Ecballium elaterium) . I collected seeds of it at il orto dei semplici elbano when I was there last fall and they sprouted like crazy this spring. They are hardly edible, bitter and toxic, though used medicinally for millennia. The Greeks considered it to be a remedy for all ills. And the ancient herbalists lauded it as the medicine with the longest shelf life. Theophrastus mentions a doctor who had 200 year old elaterium pills which had “marvelous healing properties.” 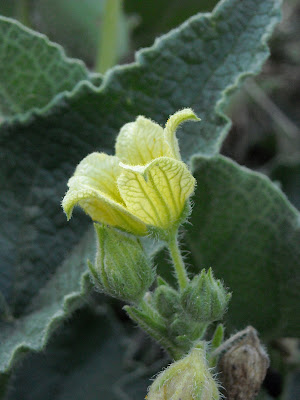 I’m not growing this plant for anything but amusement value. Actually I find it rather attractive, too, with it’s succulent hairy leaves that remind me of plectranthus, yellow nodding flowers held above the foliage and the adorably prickly fruits like unripe hedge hogs.
It is actually hard to think of cucumbers as attractive. The edible ones have rather course foliage, hidden flowers and warty fruits. But we have a native in the Northwest sometimes called “wild cucumber” but more commonly “manroot”, because of the large tuber this herbaceous perennial forms. 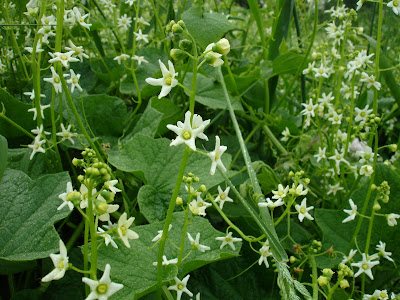 Marah oreganus is a vine that climbs 30 feet into the trees each year and when it blooms in late spring with millions of small white stars is quite beautiful. It grows on the banks of the Snoqualmie River across the road from us. Though I will never eat the bitter fruits of this vigorous vine, I’m happy to see it in bloom because that is when we’re planting our edible cucumbers. And because we save them for last it marks the end of the rigorous planting season on the farm. Now its just waiting, and weeding, until harvest. 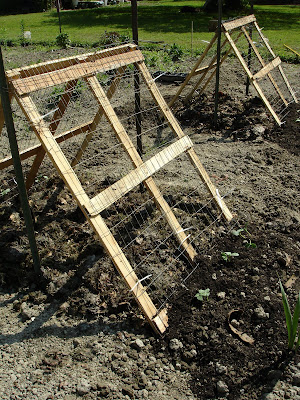 I built these "Temples for Cukes" from book palettes and goat fencing. The object is to keep the fruits off the ground where slugs might get them. The fruits dangle below the foliage and are easily harvested without damaging the vines. It's an old Portuguese method, so a friend tells me, though it seems too common sense to have occurred only to the Portuguese.
Posted by Daniel Mount at 6:27 PM
Newer Post Older Post Home