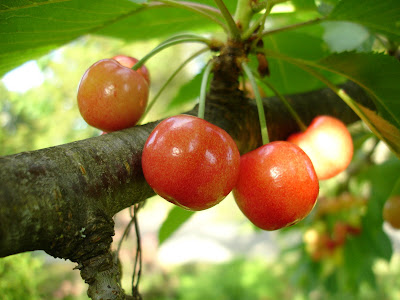 I’ve been avoiding something my whole life.
Roses.
Sure I’ve had plenty of clients over the years with roses. But I begrudgingly tended them. Dreading, sometimes, the days of picking black-spotted leaves, deadheading and raking around the thorny beasts. I was invariably bleeding by the end of the day. But I still did not come to love roses. “Miscreants,” I’d cry.
You would think since I inherited my mothers love of gardening, to the point of making it a mania, I would have inherited her love of roses. In our little urban garden most space was devoted to food production. Fruit trees, vegetable beds, and lawn to keep us kids out of her garden. But my mother kept one small bed for roses and asparagus. She grew several hybrid tea roses, but I only remember the one she revered most. The popular and easy ‘Peace’ rose. It’s wimpy color was wasted on this small boy who loved red above all colors. It’s delicate fragrance wasted on a nose that woke only to the smell of french fries frying. Maybe if she had grown some shrub roses, or ‘Abraham Lincoln” I would have caught the rose bug.
But subliminally I was being lured in by the roses, through their relatives the cherries. We had two large cherry trees outside are kitchen door. Climbable cherries covered with fruit each year right when summer vacation started. The first rewards. And they were red.
Cherries are, along with strawberries, plums, apples, peaches, blackberries, et al, in the rose family. They have the same simple five petalled flowers of species roses and , in general, sweet fragrance in bloom. Actually roses produce edible red fruits, or hips, too.
But of all these fruits I have to say cherries are my favorite. Foolishly a few days ago in the heat of the moment I said, “Watermelon is my favorite fruit.” And just a week ago I posted about my favorite vegetable/fruit, cucumbers. Yet it is truly cherries that receive this honor.
The thing about cherries is they are such a perfectly complete package as a plant. Beautiful architectural trees with shiny bark, a beautiful display of flowers early in spring, great fall color and of course those shiny tidy red fruit perfect for popping in your mouth.
Years before I landed at the farm Michael had planted six cherry trees. They are in their prime now. This spring the cherry orchard looked like a wedding cake and hummed with our neighbor’s honey bees. I lied down in the grass under the trees and tasted the first sweetness these trees had to offer. Now, just a little over a month later the cherries are ripening.
It feels like a picnic, so I got out the aluminum ladder to pick some of the highest cherries which were ripening first. Our local robin perched defiantly on the wobbly top of a near by fir tree and scolded me. He had been staking his claim for months, drawing a musical property line around our little cherry orchard with his melodious “ mine, mine, mine.”
We don’t always win at the cheery picking game. Last year when the number of cherries were fewer the birds and the raccoons beat us to most of them. So this year I wanted to be ahead of the game.
The cherries I picked were not quite ripe, lingering at the door of sweetness, just collapsing toward tenderness. Actually some were as crunchy as radishes. I ate a handful of tart redness anyway, like an over-anxious kid. The dogs waited below the ladder incase I dropped a few, their reward for waking me at 2 a.m. the other night to alert me. The raccoon was in the cherry tree again. I let them out and they chased her away. Not that I don’t like to share, but a raccoon can strip the whole tree in a matter of hours.
I even saw the black-headed grosbeaks, those good pest controllers, rapidly gobbling cherries under the radar of the robin. I guess everyone loves cherries, so I have no doubt, they are not ours alone. But with vigilant timing we might get enough for Michael to make preserves, and me, a pie. But up on the ladder it was directly into the mouth like a bird, like a raccoon, with a few falling to the waiting dogs below.
I realize I am still avoiding the roses even though we just bought two more yesterday at Antique Rose Farm in Snohomish. That means we’re up to 20, I think we lost count, new roses this year. They’re out numbering the cherries which is making me uncomfortable. Of course if you add up all the apples, plums, pears, raspberries and cherries we’ve planted it might be about even.
Eventually I will begin to photograph and to write about our burgeoning rose collection. But for now It’s the unavoidable cherry harvest requiring our vigilance. 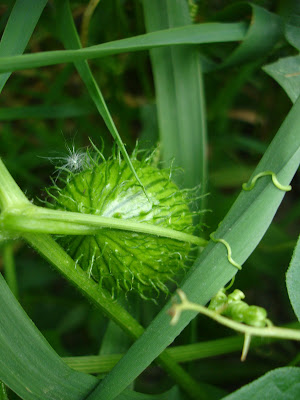 Our quirky, and totally inedible, native cucumber is setting it's first fruits, too.
Posted by Daniel Mount at 11:10 AM
Newer Post Older Post Home