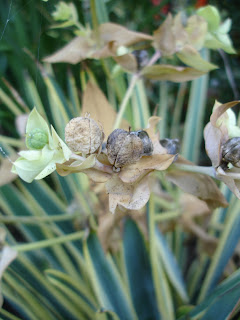 Caper spurge (Euphorbia lathyrus) seed heads emerging from the yuccas.
Posted by Daniel Mount at 8:53 AM

I have developed a healthy respect for brown.
It was hard won. As a professional gardener, I grappled with perceived expectations. When was a browning plant in my clients gardens “wrong”. There is this need to please, and to please one must see with their clients eyes. But what do they see? And what do they want to see? Do they want to see the freshness of spring even though it is not spring? Do they want summer’s robustness to hang on until the first frost? Or are they, like me, enjoying the slow decline of plants? Rarely have I heard from a client my favorite color is brown. Why is that?
Brown is an indicator.
Of death. Even more than black.
We would all rather not look at death. Whole psychological systems are based on our fear of death. Whole spiritual systems created to prove there is no death. But in the garden there is death and brown is it’s indicator.
I feel an impulse to sweep brown away the moment it appears. Like a criminal, or her cohort, I want to eliminate the evidence that the garden is going down. But then again I like to watch the garden mellow. As brown creeps in yellows get grounded, the greens harden up, even blues bend low to brown. As if all colors know they’re headed that way, at least in the garden.
Brown is not pale or vulgar, though shit is brown and unwashed potatoes. Brown is also evocative like chocolate, or cuddly like a fuzzy kiwi.
Brown in the garden spells the end. The end of flowers, of sex, of play. Is that what we fear? Brown is not lonely, though no bees buzz around browned flower heads. There is a secret to earthy old brown, at least in the garden. It contains the next flush of color. the brown spent flower heads house seeds, tulip bulbs are sheathed in slick brown coats, the brown leaves feed next years growth. Manure is brown.
So is it aesthetics only fueling my plucking? Creating an illusion?
This garden is not going down.
Is a wave more beautiful going up that down?
Why are we afraid of brown? 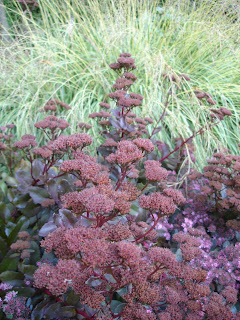 Sometimes brown is almost red, like in the old flower heads of sedum 'Moerchen" 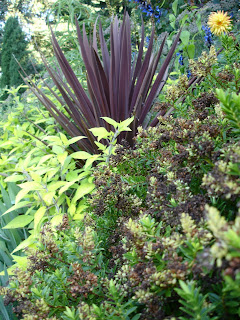 Do the clusters of boxleafed hebe seedheads distract form the scene? 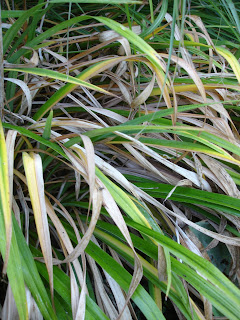 Dying day lily foliage definitely a downer in the garden.
Posted by Daniel Mount at 8:40 AM 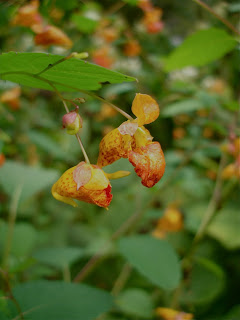 Today I was weeding a part of the garden I let go. I hadn’t done the necessary deeds since March. I covered my laziness with trailing nasturtiums which made the mess messier, but also prettier. At least for a short while, until the nasturtiums melted under a pelt of silvery mold, so I could no longer ignore that my pretty mess was really just a mess.
I was on my hands and knees most of the day. Around mid-day I looked up, wondering whether the native orange jewel weed ( Impatiens capensis ) needed yanking, too. I “inadvertently” let take over as part of the “pretty mess” I was creating. The orange jewel weed and the orange nasturtiums looked momentarily splendid as they tangled with the weeds i was trying to hide.
All my questions of the validity of my gardening methods were answered as a hummingbird flew into the picture. Jewel met jewel as the shimmery hummer,on this seamlessly gray day probed, for nectar. I decided to save the jewel weed yanking for another day.
Posted by Daniel Mount at 10:42 AM

THE CITY OF ROSES

Who can ignore the fact the Portland is the Rose City? The International Rose Test Garden was in full bloom in late September. Mind boggling. 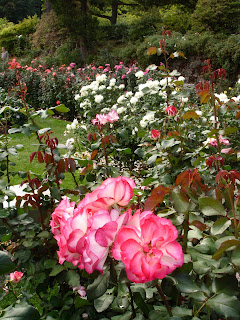 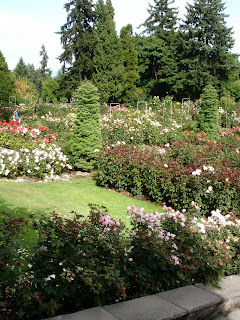 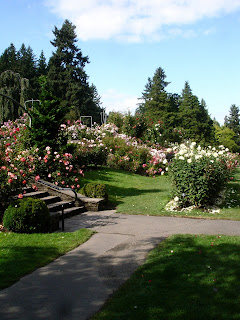 THE EAST TO THE SOUTH

Two of my favorite gardens in the world are not far from home, but worlds away from the western gardening traditions I grew up with. The Portland Classical Chinese Garden and the Portland Japanese Garden are stunning examples of traditional gardens from the other side of the Pacific. These styles have certainly influenced contemporary gardens here, but these 2 gardens executed under strict guidelines of form and tradition transport us away from this frontier civilization of the American west coast to the ancient grace of the east.
The Chinese Garden is a scholars garden. A walled garden that would have been placed in an urban setting. In Portland the towering high rises just outside the walls create a surreal effect. 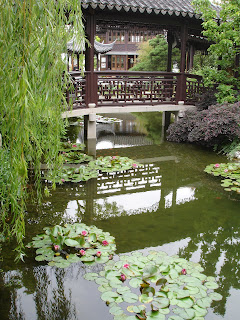 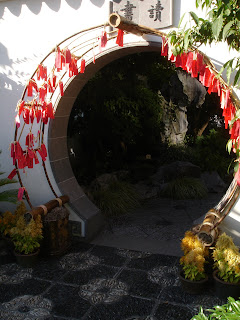 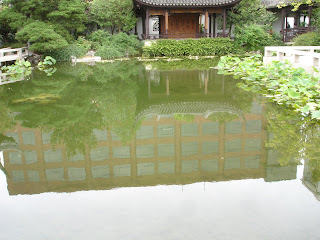 The Japanese Garden are tucked into the western hills of Portland. Snug in a heavily wooded ravine one truly feels “somewhere” else. I talked briefly with the head gardener; I asked her if her work felt like a spiritual practice. All she replied was .” This is a a sacred place.” I hope these pictures convey some of that quality. This electronic medium seems so distant from that garden. 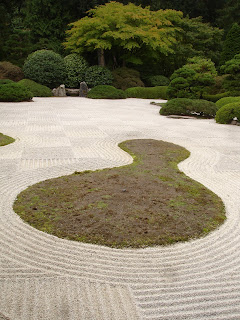 The moon viewing garden. The gravel is raked in the pattern of rice paddies for the harvest moon viewing. 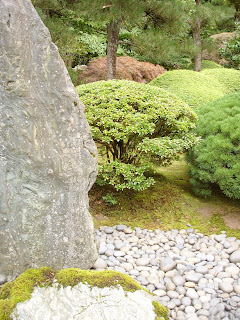 The multiple textures blend beautiful when used with a restrained color palette.
Posted by Daniel Mount at 6:16 PM

I came to Portland for the Garden Writers Association Symposium, not knowing what to expect.The whirr of garden communicators---- photographers, editors, television and radio personalities, and, of course, writers is intoxicating, not just the afternoon port in my friends’ hotel room. It’s hard to pin point what makes this experience so exciting: the lectures? the tours? the plants? the people? I’ve met more new people than I’ve met in a long time. I’d have to say the people.
But with all the swirling symposiacs drifting and reconnecting through out the day there was one stable and marvelous star this weekend. The city of Portland itself. Lovely in it’s preservationist stance, graceful in it’s ease of negotiation, charming in it’s quirkiness. And a gardeners paradise... 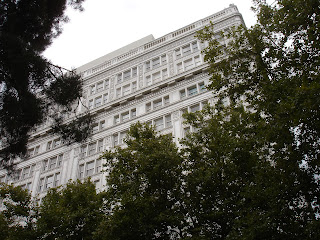 One of the beautiful terra cotta buildings making downtown Portland worth a visit. 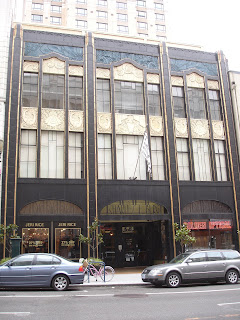 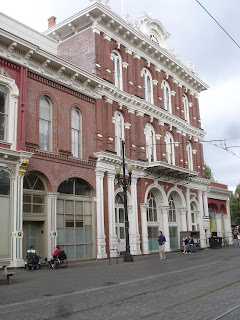 The architecture of the old city echos the yankee roots of the founders. 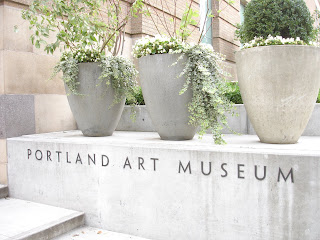 I took a break from the symposium to run to the art museum. 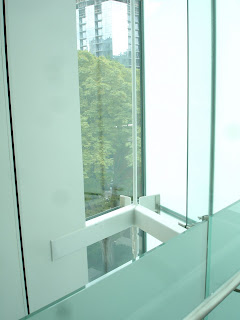 I found myself looking out the windows to get a break from the contemporay art collection. Too much together, a potluck gone wrong. Dyspepsia.
Posted by Daniel Mount at 5:40 PM

The last flighty days of summer have come. The moon, just past first quarter was haloed in red last night. The morning muffled in fog.
I wear shorts in a “last hurrah” defiance to the mornings damp chill, knowing n by mid-day it will be “hot”. But I also wear a a red and green tartan wool shirt, acknowledging the chill clinging to larger portions of the day. It is a beautiful inbetween-ness approaching equinox
It’s time to cut back the fallen and failed, under brilliant sapphire skies at mid-day..
Posted by Daniel Mount at 10:04 PM

Travel for me is always a pilgrimage, whether I travel to a true holy site, like the tomb of Kwaja Moinuddin Chisti in Ajmer, India or to an art museum. I try to make my travels reverent. Even the sunny beaches of Mexico are shrines to me, and worship a swim in the Caribbean. On my most recent trip to the East Coast, I visited gardens, schools, art museums, cemeteries, friends and retreat spaces. All with a desire in my heart for refreshment , renewal. Why else travel? I will be posting photos and thoughts from these travels over the next few days, back dated to reflect the actually days of travel. I saw many beautiful people and places was refreshed, feel renewed.
Posted by Daniel Mount at 6:39 AM 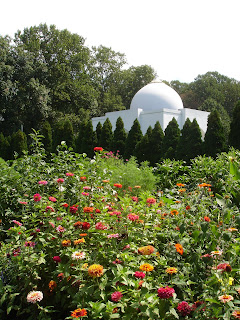 This beautiful mausoleum, or dargah, houses the remains of Bawa Muhaiyaddeen, the Sri Lankan sufi mystic who lived and taught in Philadelphia until 1986.
Posted by Daniel Mount at 9:39 PM

We cry for 2 reasons: sorrow and joy.
Chanticleer inspired both in me today. Joy at finally making it to this magnificent and innovative garden. And sorrow for having my camera battery run dry.
Still I managed a few photos, some inspired sitting. And a nap. 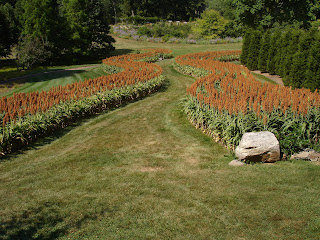 The serpentine: simplistic, symbolic and sublime. 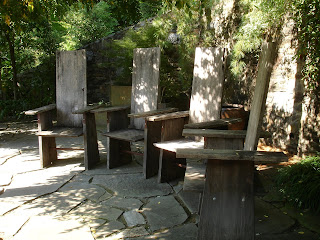 These elegant chairs are more comfortable than they look. 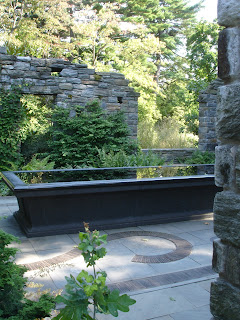 The reflection trough in the ruin garden, slighty sinister. 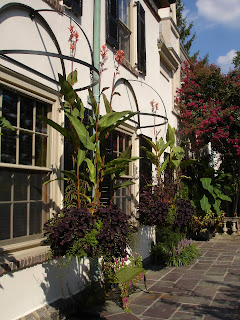 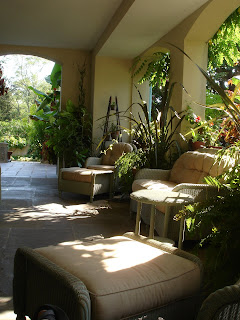 I napped here as if I were at home.
Posted by Daniel Mount at 9:15 PM
Newer Posts Older Posts Home
Subscribe to: Posts (Atom)