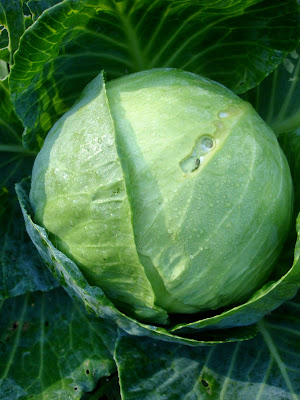 A rainy chilly morning once again dispelling any sense of summer. At least summer as I like to think of it, blistering hot, cucumber-laden, shade-seeking summer. At least the rain keeps the pools of fog out of the valley. I have a gothicky side that loves a blinding fog. But this time of year when the fogs start settling in it can mean death for our tomatoes. Already the chilly nights dipping into the 40’s--- for chrissake, it’s August!---has slowed the already sluggish ripening process.
I started to look for green tomato recipes, but the ever-optimistic Michael told me to “hold my horses”. His faith in a tomato-y future, a red ripe tomato-y future seems futile to me. But who am I to question faith? Or complain about a Northwest summer that is truly not that far from normal?
But you can’t eat 4-leafed clovers. Well, I guess you can. You might even be able to make some sort of pesto out of them. Hmmm.
Yet there is always one green thing that is ripe and ready. Cabbage. It’s no wonder they are a constant in Northern European cuisine. We had cabbage last year when summer was sweltering and we have cabbage this year when summer is faltering. Beyond my seasonal pinings for sauerkraut, I love the pallid sulfurous crunch cabbage lends to fish tacos, I even eat the slightly wilted and greasy bed of it that comes under the egg rolls in our favorite Vietnamese restaurant Tamarind Tree.
Cabbage is comfort food for me. Other people might like their loaf of bread, their potatoes, their 5 o’clock cocktail. For me it’s cabbage. Even before I was farming I always had a head of cabbage in the crisper. It’s exactly this storability which puts me at ease. We leave them in the field nearly until Christmas if we don’t get a frost. Or we hang them upside down roots and all in the basement, where they last until spring. Actually one started growing again to our amazement.
So when my flimsy faith in a red tomato-y future wanes I take precious comfort in our rows of cabbages, benign and beneficent. If there won’t be spaghetti sauce there will at least be potagers.
Yet, I can’t help but hopefully turn up the cucumber leaves in my search for supplies to fuel one of my greatest summer pleasures, pickling. This year I managed to squeeze out 4 quarts of pickles. Not a lot I know but come December, a guaranteed triumph over winter and grocery store prices. 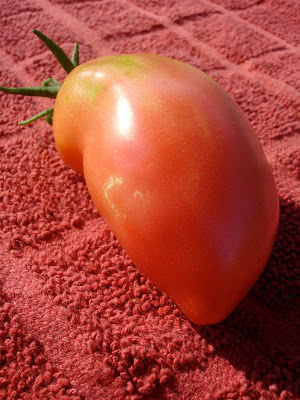 I have been driving Michael crazy with my obsession with heirloom vegetables with Wisconsin place names. After the year we tried “Pride of Wisconsin’ cantaloupe and it barely made it to boasting, he’s been suspect. But his good nature and scientific inquisitiveness always lets me experiment.
So this year it was ‘Sheboygan’ paste tomatoes. Named after the foggy city on the shores of Lake Michigan I thought they might have a chance here. Actually they’ve proven to be the only tomatoes to ripen for us so far this year. Don’t forget we have a red tomato-y future ahead. They are a lovely pink and have a delightful sweet flesh. We will definitely grow this one again. 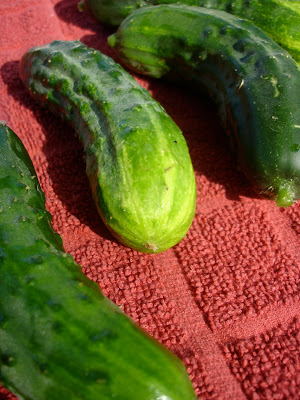 The cucumber ‘Wautoma’ named after the Central Wisconsin city famous for pickle production, Wisconsin ranks 4th in US pickle production, has not been extremely generous, how could it be with nights dipping in to the 40s. But the gherkins it did produce were, crispy and flavorful with a a dark green skin making a beautiful pickle.
Since I am off to Wisconsin tomorrow, I’m afraid I might miss that one red tomato which the future promises. Or the 3 cucumbers which are smaller than the slugs, granted we have very large slugs and a few too many this year, inching their way to completion. But I know I can take comfort in the fact that when we return in 2 weeks there will be cabbage. Not just one cabbage, but months worth of cabbage, ripe and green and ready for the picking.
Posted by Daniel Mount at 7:47 AM

PARKED IN A PARK 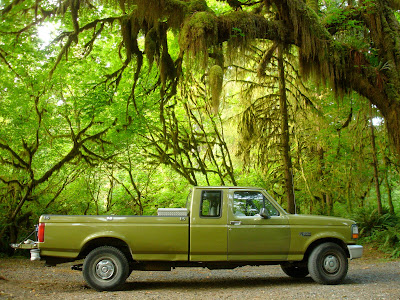 Last Monday I parked my green truck under a big leafed maple beleaguered with moss. One would think in a summer behaving more like a prolonged spring or an extremely early fall I would have headed for the sunniest location I could find. A place to bask and relax, a beach maybe, or at least a tanning booth. But not me. I headed straight for the shadowy depths of the Olympic Peninsula. The Queets River valley to be exact.
The Queets valley was added to the Olympic National Park in 1953. It is a relatively narrow finger of the park that follows the river nearly to it’s mouth at the Pacific Ocean. Once in the valley’s lush green confines I scarcely remembered the acres of clear cut I had to drive through to get there. Because this valley is not famous like the Hoh Rainforest, or tourist friendly like Lake Quinault there were few other campers. This was the place Michael and I were trying to reach last December in search of a giant sitka spruce. One wrong turn and we never made it.
Well, I made it and set up camp just meters from the 400 year old giant Sitka spruce. My little human cocoon of manufactured goods seemed so out of place, yet I felt immediately at home there, even after night fell with a darkness so thick I could not see my hand six inches in front of my face. My flashlight did little to pierce the hallucinatory blackness, but my customary shot of scotch helped immensely. The river’s sputters and tuts were all I could hear, masking sounds I might not want to hear. So I slept soundly, cougars and bears far from my roving imagination.
The first morning I hiked up the valley after fording the chilly rapids where the Sams River enters the Queets. I passed through groves of old growth Sitka spruce, Douglas firs and western hemlocks. The trail was obviously rarely used so the sense of truly entering wilderness was elating. Yet European weeds abounded. Buttercup, dock and, yes, white clover were everywhere. No, I did not find any with four leaves, though I did find a four-leafed oxalis. 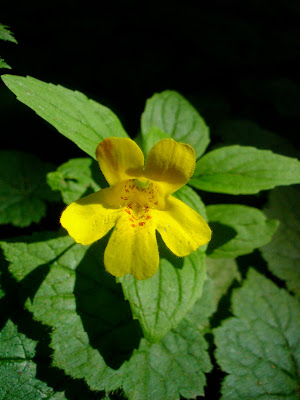 Native flowers, like this tooth-leafed monkey flower (Mimulus dentatus), though less frequent than the dandelions, were still blooming in abundance.
Therapeutic breezes sloughing off the glaciers of nearby Mount Olympus (not the one in Greece) made the hiking comfortable. There was very little climbing,too. The Queets river is rather unusual for a large river, flowing through a relatively low-gradient, heavily forested valley. So my morning hike turned into a 12 mile sojourn, as I was urged on not only by the ease of going but by the formidable giant trees, toads, fungus and the incredible and muffling moss. 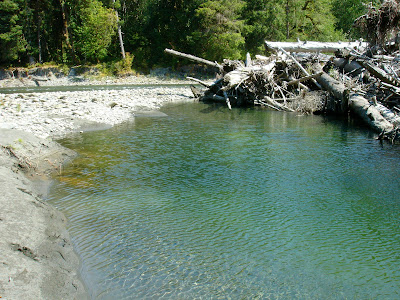 I was rewarded with a sunny beach and a warm pool. I stripped and dove in. I lied in the black sand mounded behind a log jam and took a sunny little summer vacation after all. 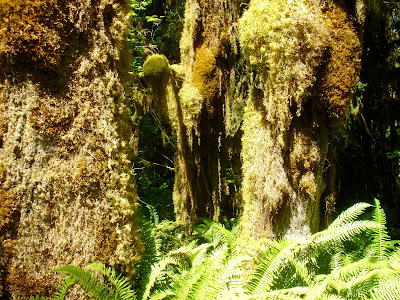 It is hard to write about the grotesque beauty of the rain forest. It is at once spellbindingly horrific and at others as whimsical as a fairy tale. The moss distorts and animates everything it grows on. Whether you imagine bears or poodles is up to you. Me, I saw nothing but moss. I had my hand lens out and looked closer than I ever looked at moss. I was reading Robin Wall Kimmerer's book Gathering Moss and her vivid and passionate description of mosses and their ways had inspired me to take a closer look. I will never see moss the same way again. 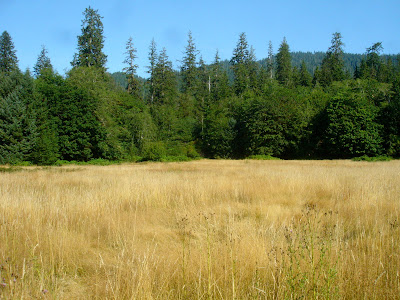 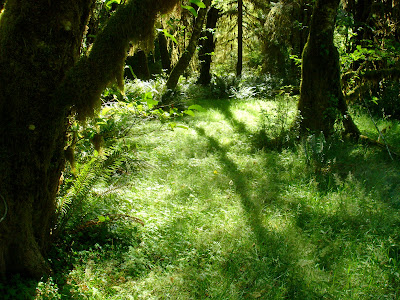 The temperate rain forest of the Pacific Northwest is not all moss and giant conifers. It breaks into meadows, thickets of salmon berries, groves of maples and shade dappled "lawns". So parklike at points to pull the word "garden" to the tip of my pencil. 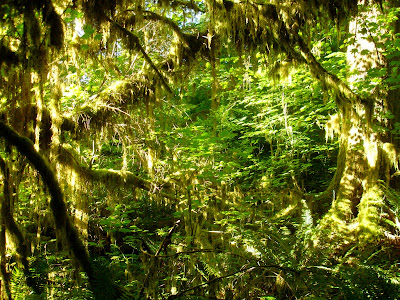 The next day I stayed closer to camp, though the visual cacophony of the forest was no lesser there. This was no garden. This cacophonous green life form seemed almost alien, yet never disquieting. Actually quite quieting. Partially because I could not control it. I didn’t need to. My eyes are always so busy in the garden's I make and tend, contriving interest, discerning, editing, enquiring. In the forest nothing was in question. Everything stood it’s ground ... 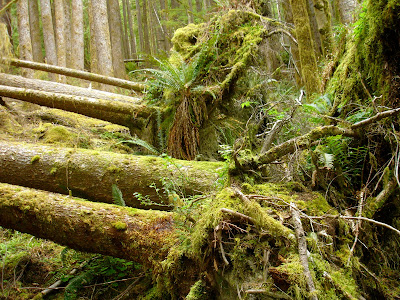 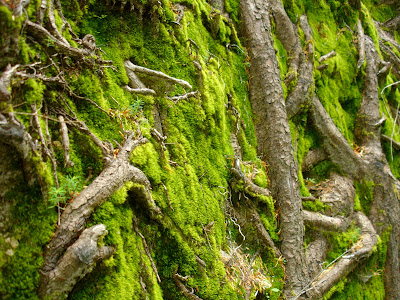 but never stopped. Every leaf, twig, trunk just fell back into the whole, became covered with moss the nursery of the future forest. 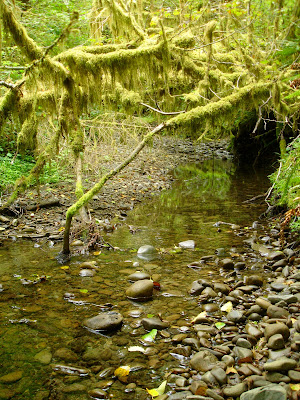 I followed elk trails and creek beds deeper in. The air remained still and humid while above the canopy creaked and popped with coastal winds. I felt safe here. Never alone, but part. 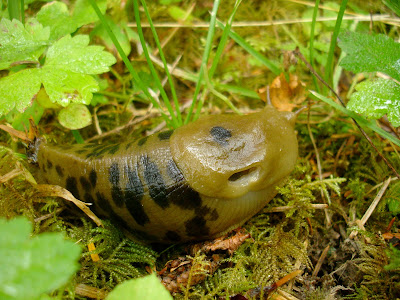 Never alone because there were always slugs. Or robins which seemed to follow me. Was I stirring up bugs? Elks coughed and whistled in the thickets. Only one showed a flank and an eye. A Douglas squirrel chattered and blamed me. Was he the same one who bombed my tent at 6 a.m. with green spruce cones? 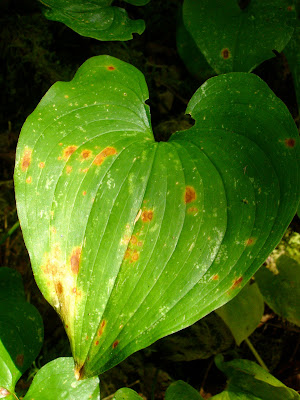 I sought out meaning in the details not able to comprehend magnificent aliveness of the whole. 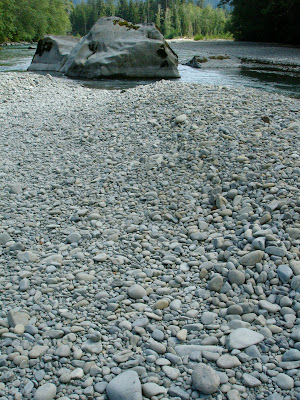 And when I tired of the green cacophony I would walk down to the river, where the water sculpted rock and gravel bars. I lied in the late August sun the aqua gurgling along the rocks a nap time lull-a-bye. I rested and swam as if I were on a real vacation.
Until I had to leave.
I was reluctant to drive out that afternoon. I was just settling into the beauty of the old growth.

But the world and it’s ways waited for me. 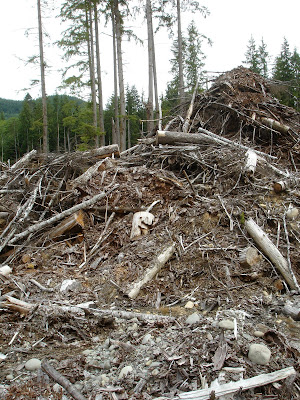 A long overdue escape to the woods is underway. Please follow these links to my column The Story of Plants: Hellebores : and Sitka Spruce
Posted by Daniel Mount at 3:35 PM 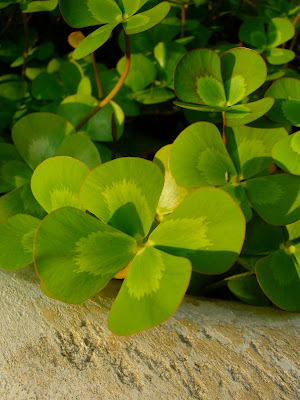 I know I was bragging a bit about my ability to find 4-leafed clovers - I actually found a 5-leafed clover this week along with a few more 4-leafed ones - but would you believe there is a guy in Alaska who has collected over 111,060 4-leafed clovers since 1999. Now ther's some luck!
And in Japan some one found a clover with 18 leaflets. I don't know if the luck is multiplied by the number of leaflets, or the rarity of the find but Shigeo Obara ended up in the Guinness Book of World Records. Not bad luck, I'd venture.
I know most of you aren't that lucky. Or obsessive/compulsive enough to scan every clover patch you encounter.
So there is always Marsilea mutica, the water clover fern. Pictured above is this lovely floating fern from Australia. If your not lucky enough to find it at your local pond supply store you can always find this purple 4-leafed version of the very common white clover.
You won't have to look to hard or long to find a 4-leafed clover in your garden then.
And it really does make you feel lucky. 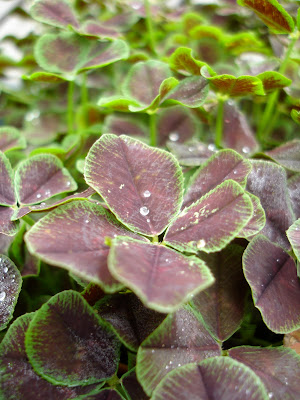