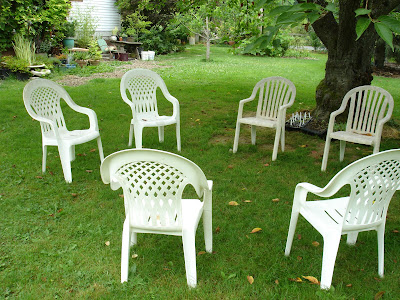 Ever since my two feet hit the ground over 50 years ago I’ve been running, or at least pedaling. Now it’s more the gas pedal, than the bike pedal. And who has time for walking besides Greenwalks? I don’t know what I’m running from (emptiness?), or toward (the finish line?); but I am certainly apace.
What seems like yesterday was a week ago. Last Sunday I actually sat in one of these chairs when Michael and I hosted the posters of SAGBUTT (Seattle Area Garden Bloggers United To Talk). We gathered out of cyberspace and met in the shade of our ‘Fuji’ cherry. Real space, real time, no matter how short, is invaluable.
Now here I am coming in last.
I never took a moment from my busy week to thank them all for the gifts: a bouquet of lavender, astrantias, generous swags from a ‘Maid of Kent’ rose for striking, coffee bags for mulching, and hand scrub, which has been doing a great clean up job on my gnarly farmers feet -- I’m often a barefoot weeder.
I never took a moment to mention the delicious food left behind which we continued to eat into the week: vibrant green fava bean hummus, “eyeball cakes”, and the lingering tart memory of David’s rhubarb juice-- I’m craving more. I never took time to send off the recipe for the black currant cake to Jean.
I never took a moment to post. Yet the truly Intercontinental Gardener, Liisa was able to express Michael’s and my space better than I ever managed after only one visit. And Paula’s delight at seeing eggplant growing for the first time echoed our own delight at finally getting it to grow. Thank God for a hot summer for a change.
And thank you all for coming and helping me see our garden with new, and less critical eyes.
Sorry for this fast and furious posting but I have to run off to do some weeding.
Posted by Daniel Mount at 10:22 AM

Each year I retreat from what seems to be seamless days of gardening. From clients to the farm and back to the clients, I never seem to be anywhere where I am not gardening. Even here in cyberspace I am constantly writing about gardening. My favorite place to get away from it all, is not a beach, nor a movie theater (though I do love a matinee on a hot day), nor a book ( I mostly read about gardening anyway). I escape to the mountains, where I become a botanist. I don't weed, or deadhead, or water. I just study the plants and how they grow. I know this might not sound like a get-away from gardening, but I can't help myself I love plants. Here are some of my favorites from Tucquala Meadows, my favorite place to go to get away from it all. I was there last week one of the peak times to see wildflowers there. 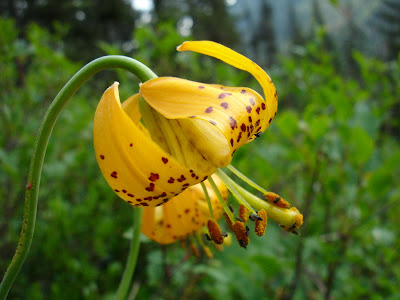 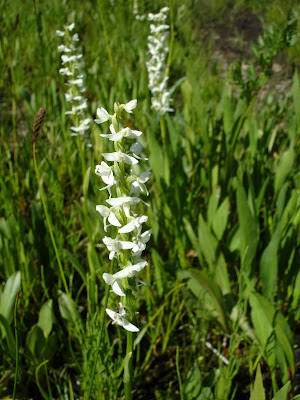 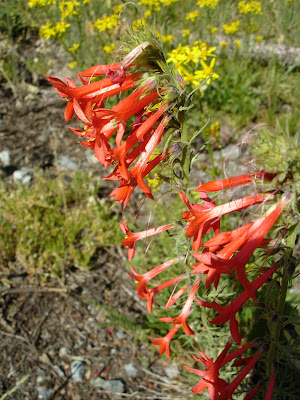 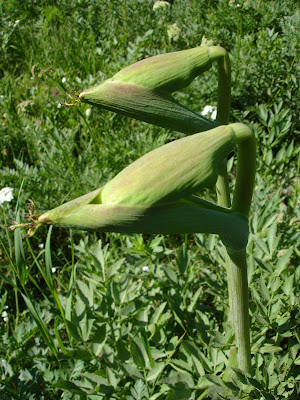 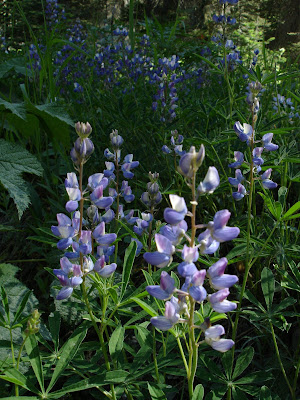 One of the over 100 species of lupine (Lupinus sp) growing wild in our area. I haven't figured out which one this is yet.
Posted by Daniel Mount at 8:04 AM

THERE WILL BE WEEDS

Before I met Michael I lived the simple life.
I gardened during the week for my clients and lived in a second floor apartment with a 10 x 17 foot deck, cluttered - albiet tastefully - with plants in pots. At one point I had 17 different species of willow. I was obviously a man who needed a piece of dirt.
But I also am a man who loves free time for reading and socializing, so I resisted moving to Michael’s 7 acre farm. Eventually I caved in. A year and a a half ago I moved. The absolutley uncontrolable expanse of 7 acres nestled into Carnation Marsh, a 150 acre Audobon Society bird sanctuary, was quite a jump from the little self-contained world of my deck.
As someone who spends most of his week controlling, or at least thinking he’s controlling, other peoples properties, 3 estates totaling about 10 acres, I was loath to fill my weekends with yet more gardening. That’s where the resistance came in. Actually I looked forward to planting trees it was the weeding I dreaded. I have always been a firm believer in “getting all the weeds out”. I think it was my mother - her garden was always weed free - who put that idea in my head.
But the longer I’m here the less weeds I see.
I find weeds among the vegetables actually keeping the soil cooler and moister in this dry, hot summer. And we still have a bountiful harvest. The bigger weed problems of reed canary grass and blackberries we have on the run. Yet the unstoppable buttercup and morning glory remain unstoppable.
These challenges are equally balanced with blessings. The insurmountable weed problem is letting a little lassez-faire attitude creep into my life. Am I relaxing? Also the extra space - can you imagine 7 acres? - allows us to plant behemoths like gunnera, rambling roses and giant sequoias, and still have room for a 60 x 160 foot vegetable patch.
I never imagined I’d have a garden needing to be managed with a riding mower, a chain saw and a weed wacker. I never imagined weeding willows. I, also, never imagined myself doing battle with nature. So I imagine myself a barber on a giant scale, giving nature just a trim around the edges, because truly that is all I’m doing. I still get down on my hands and knees and tweeze weeds from among the onions with thumb and forefinger. But I’ve stopped imaging the perfectly designed garden composed of all my favorite plants, an exquisite replica of my mind’s eden. Instead we have natures eden to contend with, I wonder sometimes if Adam and Eve weren’t expelled from the garden but walked willingly away from the uncontrollable mess called “Nature”.
Michael and I are trying to strike a balance between wildness and control. Sometimes I think we are just teetering on the edge of the abyss. I know the minute we look away the morning glory just yanked starts growing again. I envy Michael’s seeming ease in the face of it all. My “standards” often get in the way, stopping me from just being happy with what is. It took the flood to make me realize whose garden this really is. Not ours. We’re momentary inhabitants, like the black headed grosbeaks who summer here.
But tomorrow you might catch me out weeding somewhere because we are expecting visitors in the garden.
Posted by Daniel Mount at 9:39 PM

There is a good reason a gang of crows is called a murder. And it’s not because of the sinister blackness, or sepulchral caw. They’re blood thirsty, or should I say yolk thirsty.
The towhee nest I inadvertently (see last post) exposed, and clumsily and inefficiently tried to cover, was raided. Not one egg is left. I found a few bloody egg shells in the garden. I guess that makes me an accomplice to murder, but that’s nothing new. I had a pork sandwich for dinner yesterday, my tax dollars support the war in Iraq. Even today I cut a slug in half, a very intimate murder. I guess in the big picture a few songbird eggs are minor compared to what we’re doing.
Posted by Daniel Mount at 7:23 PM
Newer Posts Older Posts Home
Subscribe to: Posts (Atom)