On a cold and rainy Saturday last month, when I was trapped in the Plum Island beach house of my dear old friend, the songwriter Loey Nelson, I found I had not only taken a trip to the East Coast put the past. The historical past of New England and the personal past of rainy coloring book Saturdays. It wasn’t Loey I colored with but her 4 year old son Andreas. We shared a scrambled box of crayons and a coloring book, each taking a page. I riffled through the crayon box looking for the most natural colors, while Andreas grabbed red and hit the page ignoring the outlines set out by the coloring book designer, even sometimes ignoring the page his stokes on to the floor. He finished and was ready to turn the page long before I ever got one color laid down on the vest of a cartoon cowboy cat, yodeling with guitar in hand.
As we turned pages I knew we had to speed up, to cast out my ideas of coloring-in and just lay down color on the page as fast as possible before Andreas turned the next page. It was incredibly liberating, this boundless coloring, though the end result may have been not os aesthetically gratifying. It also made me aware how much my mind clings to all the outlines, boundaries, fences around things. How as a gardener I am ceaselessly maintaining them, the edge of the beds against the lawns, the property lines, the fences.
The ubiquitous and ever-commenting "they" say “Good fences make good neighbors.” Or, is it good neighbors that make good fences? Either way a boundary is constructed for many reasons. To keep the dog in, or the neighbors kids out. To state “this is mine” and “that is yours”.
My childhood garden was bounded by a white picket fence to the south, but our neighbors to the north had no fence. Can you guess which neighbor was more friendly? Who we shared more vegetables from our garden with? And who shared the apples from their giant tree, which we kids were allowed to climb?
I’ve taken a particular interest in fences lately. Not just as boundaries, but as objects, elements of design and use, as symbols, and as, well, fences. I’ve never built a fence. I’ve never owned anything to put a fence around, unless you consider the makeshift pen around the ducks a fencing of my property. I really did it to protect them from the coyotes. But you can see where this is leading. Fences are useful for many reasons and you can’t avoid them.
Each week as I drive around photographing fences discerning their uses and their beauty, I become more entranced, amused and puzzled by them. I plan on doing several posts over the next few weeks about what I’m seeing, why they entrance, amuse or puzzle me. Why sometimes these last few weeks I’ve been yodeling in the car, the old cowboy tune“ Don’t Fence Me In.”
I’ve been working on an article for The Washington Park Arboretum Bulletin about the Arboretum Nacional Juan Bautistas Salas Estrada in Managua, so I decided to start with photos of fences I’d seen in Nicaragua last winter. Many fences there, especially on Little Corn Island where we spent most of our time, are make shift which I find very charming and most are for keeping animals in or out. So function out weighs aesthetics, and from the looks of the materials, cost effectiveness plays a huge role. 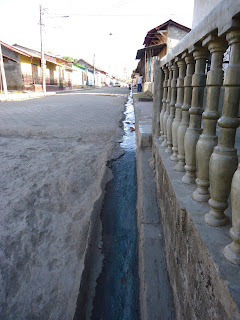 Is a fence defined by materials or use? Is this stone balustrade a fence of sorts? 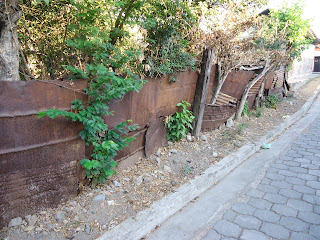 A fence or a wall? I think of fences as being permeable, letting air and light pass through. 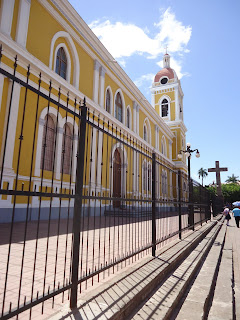 The Catholic Church can afford some pretty fancy fences. Is this one around the cathedral in the center of Granada to keep satan and looters out, or to keep the faithful in the fold? 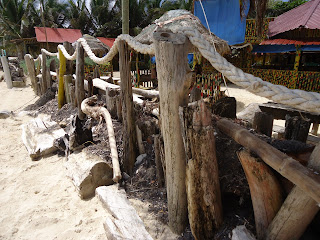 The seemingly purposeless fence tells people on the public beach where the private resort's property begins. 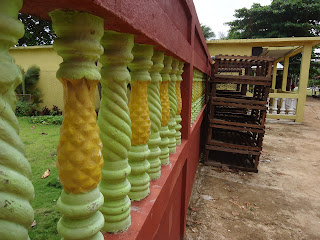 Once again, it acts like a fence, is permeable to light and air, one of my criteria for a fence, but it's made of concrete not a fencing material at all. 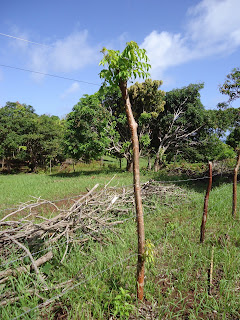 In the tropics many trees sprout from a limb chopped off and stuck in the ground, thus living fences, which actually shade cattle and act as wind breaks to crops as they mature. A very useful sort of fence in this photos made with jinocuabo (Bursera simaruba) commonly used through out Central America fro living fences. 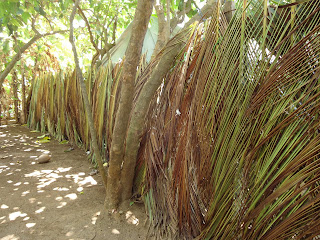 A trick fence at a resort. There is actually chain link under those palm fronds.
Posted by Daniel Mount at 1:48 PM
Newer Posts Older Posts Home
Subscribe to: Posts (Atom)