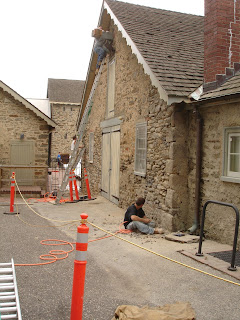 I guess after 260+ years your house and garden might need some renovation,too. Here at Bartram’s Garden plenty of renovation was going on.
John Bartram was an avid naturalist, and in particular a botanist. Actually he was the botanist to George III of England. Later his son William eclipsed his father with his lively travel writing that involved contact with the Native Americans of the South East, alligators and of course plants. there home on the banks of the Schuykill River in Philadelphia, remains a monument not only to the early days of botany in the new world, but a testament also to the Bartrams’ Quaker faith their pacifist ways and belief in the interconnectedness of all living things. Over the years the garden has remained humbly near it roots. It is considered the first and longest existing botanical garden in the U.S. Bartram entertain many famous fore-fathers like Washington, Jefferson and Franklin in his garden. Washington, it is said, found Bartram’s garden “messy”. Bartram was truly more interested in plants and their natural habitats than in any sort of contrived formalities borrowed form the old world. This is still evident .
I learned about Bartram during my botany studies. So in his garden nearly 300 years later I find I am dazzled more by his mythic presence than by colorful exotics, and my love of the simplest native flowers wakes. This drawing down and in makes Bartram’s garden a place of serenity and contemplation. Here I sit in the stench of modernity, there are refineries across the river, and listen to a cicada’s rattled whirr. The broken moist winds, remnants of hurricane Fay dissipate over the garden. Here nature is the garden and it is endless.
Bartram’s masterpiece was not in layout or design but in erudition and love. A love for the natural world around him from which he fashioned his furnishing , house and garden. Could he have also been the father of the green movement, long before it was necessary? 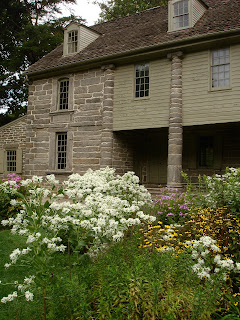 The house Bartram built; he actually carved the stone himself from the local Wissahikon Schist. 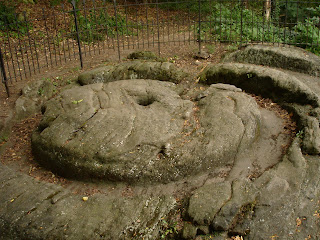 The cider press on the river has the feel of a mystical relic. 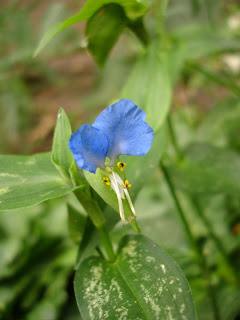 Commellina erecta, the dayflower, is a blue like none other. 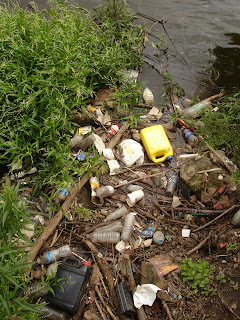 This is not the mess Washington was speaking of. It's a shame that the modern world has washed up on the banks of this garden.
Posted by Daniel Mount at 6:36 AM
Newer Post Older Post Home