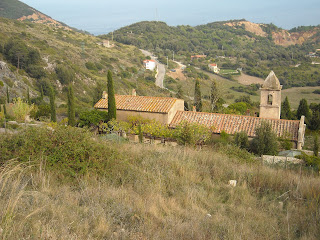 I spent the fall and part of the winter of 1998 at Il Eremo di Santa Caterina. I gardened and wrote. The hermitage was created in the 16th century on a site that was held sacred since ancient times, some say even prehistory. It definitely is a powerful place and the monk who saw an apparition of the saint there was the inspiration for its creation. It had been abandoned in the 1800’s and remained so until the 1970’s when photographer, writer and old rose enthusiast Hans Georg Berger [ see link to his website ot the right] made it his project to revive the site and create an artist retreat. With the association Amici di Santa Caterina (Friends of Santa Caterina) they brought the space back and began the construction of a botananical garden devoted to the plants of the Tuscan Archipelago. That’s where I came in 10 years ago and again this October.
I was fortunate to be invited back to help the garden once again. But it was also a great blessing to be able to “retreat” from the world of candidates and market crashes and watch the full moon slowly rise, and listen to the pettirossos’ melodious chatter in the morning. We should all have such beautiful places to work. At least 2 weeks out of the year. 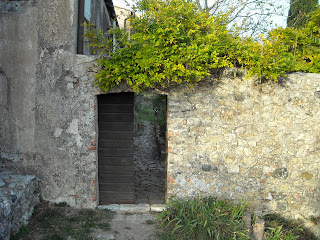 The entrance to the hortus conclusus, the private artist retreat space at Santa Caterina. 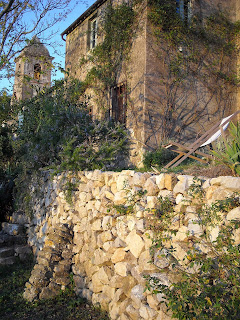