Here is my article from Garden Notes for the Fall issue. 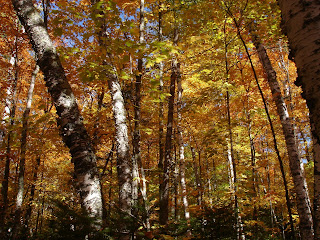 Maple and Birch forest on the shore of Ottawa Lake in the Upper Penninsula of Michigan.


In the Upper Penninsula of
Michigan there is a forty-acre wood
thick with sugar maples. I make a
pilgrimage there as often as I can.
Pilgrimages fueled by nostalgia. I
have visited those trees on my
parents’ farm since childhood. A
reverence also drives my visit, a
reverence for the sugar maple itself.
Sugar maples—the calendar girls of
fall color—are lauded by poets,
photographers, and nurserymen.
They’ve even inspired a Canadian
flag maker. But not, apparently,
Northwest gardeners.
An adaptable tree, Acer saccharum is
most abundant between the 43rd and
46th parallel, from the Atlantic to the
Mississippi. If you include the seven
subspecies and three varieties, which
some botanists retain as separate species,
it has a far wider range, into the cloud
forests of Guatamala and the sunny
slopes of the Rockies. It is one of over
150 species of maples in Aceraceae, a
family of only two genera. Most are
found in China and Japan. In North
America we have thirteen species,
A. saccharum being the most famous.
But Northwesterners are more familiar
with this maple’s sweet sap than any of
its nearly forty cultivars.
The crop that needs no sowing or
hoeing had been part of the native diet
long before Europeans landed on this
continent. According to Lenape legend,
the Algonquin tribes learned to “drink”
from the maple tree, Axsinaminshi, from
woodpeckers. Sugaring was a time of
celebration called “Maple Moon,”
beckoning the onset of spring. European
settlers took quickly to this celebratory
sugaring and the syrup’s energizing
effects. The high taxes on cane sugar
made the sugaring industry strong until
the early 20th century. Since then
production has fallen to nearly a fifth of
what it was. The healthful syrup is high
in potassium, manganese, and zinc. With
a celebrity endorsement from Beyonce,
who made the maple syrup diet popular,
and the higher costs of importing,
sugaring might make a comeback.
The wood, as highly valued as ever,
is used for everything from flooring to
musical instruments. The hard, fine-
grained wood gets smoother instead of
rougher with use. The Romans, who
used the hard wood of their native
maples for spear shafts, gave rise to the
genus name Acer, meaning “sharp.”
So why is this tree, chosen by four
states for their state tree, lauded by
poets, and a perennial October calendar
candidate, so seldom seen in the
Northwest? Arthur Lee Jacobson lists only
thirteen stately old trees, probably
planted by nostalgic Yankees, in his
Trees of Seattle. The Washington Park
Arboretum has only four cultivars and
three subspecies in its maple collection.
Maybe the sugar maple, disliking air
pollution, compacted soil, and heat
and drought, is over-shadowed by
the tractable Norway maple (A.
platanoides) and its innumerable
cultivars as a street tree. Yet A.
saccharum ‘Green Mountain’ and
A. s. ‘Commemoration’, thick-leaved
drought-tolerant cultivars with tight
crowns, are ideal for street
plantings. Maybe the elegant
Japanese maple (A. palmatum) has
eclipsed cultivars like ‘Brocade’, a
small tree with long, red-petioled,
deeply dissected leaves. Or maybe the
size is a deterrent. The record holder is
138’ tall. Yet the slow growing cut-leaved
‘Sweet Shadow’ would fit nicely into a
suburban lot. There are narrow forms
like ‘Temple’s Upright’ and ‘Newton’s
Sentry’, which A.L. Jacobson calls “ludi-
crously thin,” so why are you
complaining you don’t have room for
another tree?
I found room and planted a seedling
from my parents’ grove at our farm in
Carnation. I know we don’t have a
“sugaring” climate; yet, I look forward to
watching our sugar maple spread out
graceful branches and develop a dark
furrowed bark. I look forward to the fog
of chartreuse flowers in the spring, and a
generous amount of shade come
summer. But more than anything, I look
forward to the legendary golds and
oranges of fall and the short pilgrimage,
just a glance out the bedroom window,
to one of my favorite trees. 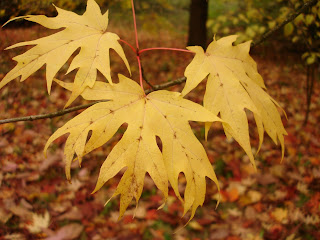