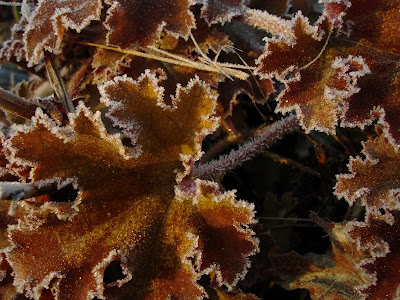 We’ve made it half way. Two days ago was Imbolc, the pagan festival that celebrates the halfway point between winter solstice and spring equinox. You might think of it as Candlemas if you follow the Catholic calendar, or Ground Hog’s Day if you’re a T.V. meteorologist. What it means to everyone in the northern hemisphere is that the days are getting markedly longer, and you couldn’t complain about that, no matter what your religion.
We are lucky in the Northwest to be having a sunny spell. A long overdue sunny spell. You can really fell the jump toward spring, the birds are singing more and dandelions begin to pock the lawn. But it’s the sun, so warm ,so bright that gets all the credit for our good moods these days.
I’m busy in the garden again. Pruning shrubs. Cutting back the last of the perennials. Hopefully fertilizing. I’m as busy as the flocks of robins gorging on the waking insects, getting drunk on the fermenting cotoneaster berries.
I’m a little drunk myself, on sunshine. The gray diffuse sheen we called days these passed weeks was hard . Weather dependent, I guess that’s what I am.
The English novelist Julian Barnes wanted to entitled his first novel “No Weather”. Actually as a young writer he vowed to never write about the weather. I don’t know if he managed it, but it seems to me like a perverse literary pretense. Maybe he felt that the weather was too mundane for great fiction, or that “the most popular subject of conversation” would bog down his fleet stories. I don’t know how you could leave it out. Weather influences everyone and everything. It is the common denominator. No matter your religion, race, political affiliation or sexual orientation weather, like love, will get you. Maybe it this incredible loss of control in the face of weather that makes us human.
Look at London. Big powerful London. Modern fast moving London, shut down by 4 inches of snow. Julian Barnes lives in London. I wonder what he’s thinking about weather now. Was he part of the throngs of Londoners who came out to play, because everything else was impossible? Does he look for a sunny spot on a park bench in February?
Last night I went out to say good night to the stars. It’s a silly little bedtime ritual I’ve initiated since I’ve moved to the country. As if they were my children, or I, theirs. The moon and Jupiter were icy white and brightly haloed. The temperatures had already dropped below freezing. If it were summer I might have lied on the deck and soaked up some star light, but a thin layer of ice was already forming and i was longing for bed.
By morning the world was frosted. I had to scrape the windshield, but that was a small price to pay for being able to see the sunrise. 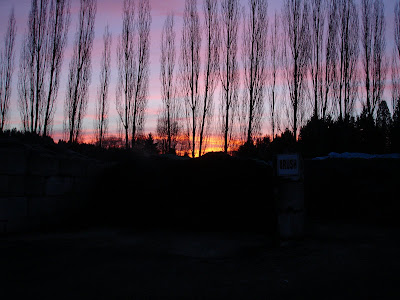