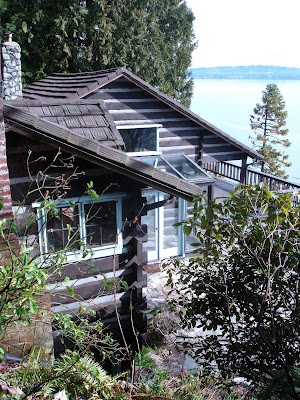 Islands run in chains, archipelagos, cluster along a coast like chicks around a hen. Look at the Aleutians or the Tuscan Archipelago.There is a chain of island gardens in my life. Last fall it was il orto dei semplici elbano in Italy, this past winter our little farm in Carnation became islandized 3 times by flood waters. This past week I added another island garden to this chain.
My friend, and writer, Abigail Carter [ see link to her site in side bar] bought the Betty MacDonald house on Vashon Island in the Puget Sound. Betty MacDonald, most famous for The Egg and I, and the Mrs. Piggle-Wiggle books lived there from 1942 to 1955. She wrote most of her books there. When she wrote the Egg and I there were only 2 small cabins on the site. With the money she made from selling the book rights to Hollywood she expanded the small cabin into a beautiful house. Nestled into a steep bluff above Puget Sound, it is the perfect place for a writer, secluded but looking out, intimate, but with a grand view.
The garden helps create this double aspect. Over the years the trees and shrubs have grown out form the bluff above the house and enfolded it in shade. This shady garden composed of old trees and shrubs, some panted by Betty herself, has a lush carpet of native sword ferns and invasive english ivy. Below the house the plants have been kept in check to keep the magnificent view of the Sound and Mount Rainier open. Gardens on steep sights like this are invariably neglected. Not only is the nearly vertical bluff hard to work, but removal of invasives like himalayan blackberries would expose the soil to rain and erosion. So what makes up Abby’s garden is predominantly the terraces above and around the house.
I jumped at the chance when she asked me to help her with the garden. I transform from a gardener to an archeologist in old gardens. It becomes a process of discovery, more than creation. I spent most of the day poking holes in the garden. Eliminating old branches and ivy, exposing rocks and letting light into corners, dark too long. I took a mental inventory of the plants. Finding the garden in the garden I planned what to do next. The weather was beautiful and though I worked rapidly I realized this would be a slow process.
Luckily Abby is in no rush. Though the neglect winds up a archaeological gardener like me, to most the wildly carefree grounds makes them slow down, turn inward, or outward into the view. This double aspect brings a sense of wholeness to the mind, a sense of healing. Appropriately Abby donates this space for healing retreats hosted by the Seattle Healing Center. She also offers it for summer rentals, you can contact her through her website if you’re interested. 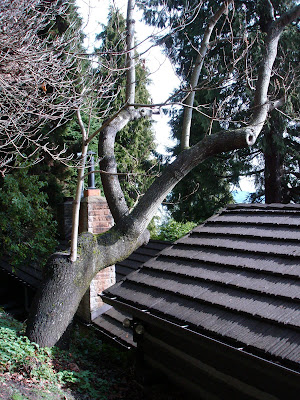 This huge empress tree slithering out from the bluff like a huge anaconda hungry for light, was planted by Betty in the 1940's.
Posted by Daniel Mount at 8:46 AM
Newer Post Older Post Home