I had been jettisoned away from the faux-spring of the Northwest Flower and Garden Show, my mind still filled with robiny imaginings. It feels like more than a week ago that the snow started to fall as I landed in Minneapolis. I transfered planes and took off ahead of the front. I had only only out raced the storm by a few hours, shortly after I landed in Milwaukee the snow flew in.
I hadn’t dressed for the weather.
I packed for a funeral. The funeral of my mother’s sister, my Aunt Nancy. Though the snow would have shut down the Pacific Northwest, Wisconsin kept moving, sluggishly kept moving. People came from all over the state, and the country to pay their last respects to this loving woman.
It was a flowery funeral. Peach roses, long-stemmed snapdragons reaching toward heaven, lilies, carnations, more roses and glads. It was a mini garden show. Were we trying to recreate the garden from which she sprang, to which she returned with our floral offerings?
But even with all this floral splendor something was missing, at least in my mind.
Nasturtiums.
My Aunt Nancy loved nasturtiums. But where do you find nasturtiums in February, when 8 inches of snow is falling, not even a bud swelling on the trees. I had nasturtiums in my heart though, orangey-bright and peppery. Cheerful, optimistic.
An optimistic cousin said to me, “The robins will be back soon,” though she stood before a window filled with nothing but white
I smiled because I found it hard to imagine robins at that moment. Even the hardy chick-a-dees and the rascally blue jays were hidden that day. But like everyone I like to look out from pain, away from the loss toward the day the pain will stop, the snow will stop and the first robin will hop across the lawn.

Just as quickly as I was dropped back into wintery Wisconsin --real winter, not this wimpy indecisive winter of the Northwest-- I was jettisoned back to the Northwest, my family painfully far behind. I was back to my winter garden tasks within 12 hours. The air was sweetly dirty. Floral fragrances jumped forward. Here February is like spring there. Just the day before I lied on my brother’s sofa staring out the plate glass window at a white world, now I tugged at the first weeds of the year. Or are they the last of the past year? 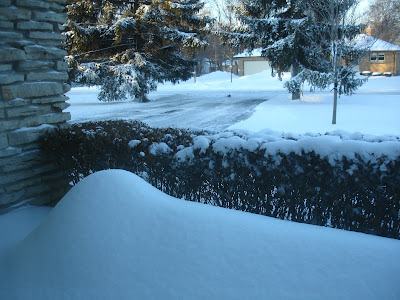 Here everything is green, blooming has begun.

But we weren’t done. 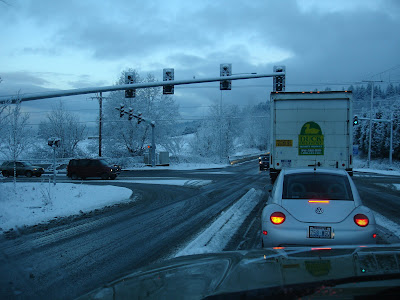 It snowed on Thursday.
A brisk warmish friendly snow. Not enough to stop traffic, even here, but enough to stop gardening. So I stayed home to organize my library. I could have gotten something done that needed doing , but snow days are like holidays. I knew I had to fight the desire to nap at 10 a.m. So I gave myself the fun little project of reorganizing my library, which mostly involved paging through books that have been sleeping on the shelf for years.
By Friday the snow had melted. I was back to gardening. Midday a flock of robins landed on the lawn. 30 or more. As many as the tasks still on my winter gardening list. A list that starts with “ March,” followed by a colon, and then “ patience”. This now seems easy when I think of all those years growing up in Wisconsin, growing up in winter waiting for the first robin.
And Nasturtiums. 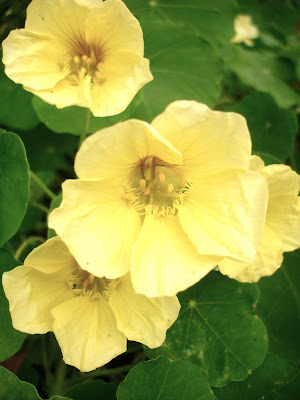