If clothes make the man, weather makes the garden. No matter how clever my plantings, how thorough my care a heavy rain, a cold spring, or a hot dry spell can alter a garden in ways never intended. 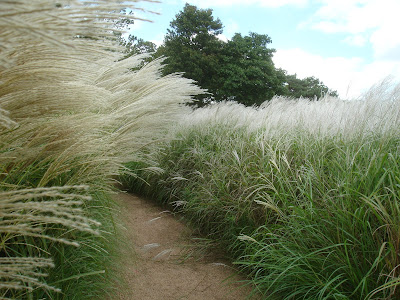 A few weeks ago when I visited the Chicago Botanical Garden with my sister Julie, the winds were high the sky smudgy with clouds, making photography rather difficult and the whole visit fraught with a low level irritation. Not at all my experience there on other occasions. I didn’t like the garden. But truly I didn’t like the weather. Even though the stiff Japanese garden didn’t budge in the winds there was no tranquility to it, only resistance. The only serenity to be found that day was in the banks of ornamental grasses plowed over by the forceful winds. They had no qualms as they became the winds, which we could not. 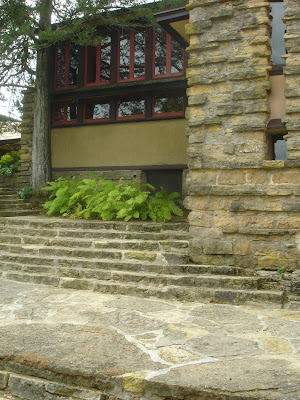 A few days later at Taliesen the winds were more rambunctious. As Michael and I roamed the hills of this fascinating estate, we were nearly blown away. Yet Frank Lloyd Wright who grew up in this rolling landscape along the Wisconsin River, knew these winds and designed bluffs and coves of ferny stillness which were refuges on our tour.

Just a few days ago it was a weather-less day. No shadow under the thin fog, no precipitation, no wind. The fog lent a whiteness to the morning that made everything gray. Yet you could hear the sun’s rays pinging off the upper surface of the fog bank as they slowly stripped it away with seductive slowness. First the shoulder of a hill, then the moony pale inner thigh of the lake. Eventually the sun broke through and a breeze trembled through the springy boughs.
Even this little shift from morning to afternoon was a reminder of the direction we were heading.
Yes, the winds will come.
The leaves will fly.
The rains fall, and the frosts kill.
That weather-less day was the last day of summer and, paraphrasing T.S. Eliot, it ended with a whimper, not a bang.
Posted by Daniel Mount at 8:06 PM
Newer Post Older Post Home