I thought I had exhausted the nursery possibilities here in the Northwest. Maybe I was exhausted, gave up the hunt for something new. I stopped going to plant sales, started doing more mail order. Dragged seed back from Italy, Turkey and Wisconsin.
Yes, Wisconsin.
I’m getting older, becoming more motivated by nostalgia than innovation. Last month, I traveled with glee through my home state which I loathed with a premeditated boredom just years ago, over 25 now. Having firmly and irreversibly moved away, and as I said, having grown older and more nostalgic, I find Wisconsin a delightful place. Its rather lackadaisical - you must realize I live with a view to the rather dramatic tectonic uplift of the Cascades - landscape has a loveliness akin to Central Europe or England. As we drove through rolling farm land, the shear agronomic force of the state made us hungry. And Wisconsinites, my family among them, have a propensity toward eating. As we drove by wagon loads of melons, squash and sweet corn I begrudged our road trip which did not always involve a kitchen at the end of the day.Though we did mange a stop at a cheese factory for “squeeky” cheese.
But Michael and I were not on a culinary foray, but a horticultural one. When I lived in Wisconsin, it’s where I studied botany, I rarely found time for gardens. I was in the woods or in a bar, or the library. I had not quite seen my future as a gardener. Though there were gardeners all around me and I always managed to find the 3 square feet of bare dirt behind any apartment I lived in to fill with a tomato plant or sunflowers, I still did not consider myself a gardener. Even to this day I have a shrug-it-off reluctance to calling myself a gardener, though I garden continually. And when not gardening I am writing about gardening.
So Wisconsin had many surprises for us with it’s many interesting and regionally driven gardens. As we toured around I began to realize a whole host of my favorite plants either come form there or perform better there than in the timid climate of the Pacific Northwest. I am especially fond of prairie plants. Liatris, black eyed susans, tall blue-stem, golden rod. I have tried to use them in the gardens I create here, but eventually they succumb to the dry summers or a warm wet winter. These plants were made to thrive in a harsh climate. Only in rare pockets of the Northwest have I seen the prairie style of gardening succeed. Yet there even the weedy roadsides looked like grand mixed borders and European weeds like Queen Anne’s lace, day lilies and sow thistle wriggled into the mix as if guided by a designing hand.
One of the few prairie plants I have had success with in the Northwest is the black-eyed susan (Rudbeckia ssp.) Their outlandish color, though hard to mix, and stalwart nature has made them nearly ubiquitous at this point. Yet I never tire of this ubiquity especially at this time of year when doses of strong color assuage any melancholy brought on by the encroaching gray. 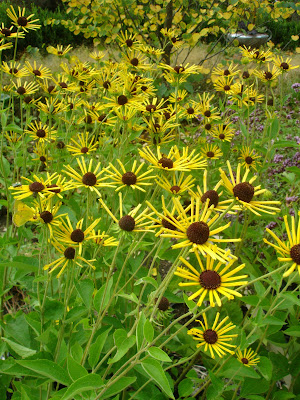 I was captivated by the height and pinwheel-like flowers of the sweet black-eyed susan named ‘Henry Eilers’ (Rudbeckia subtomentosa), when I saw it at Northwind Perennial Farm. With the impulse of a neophyte I bought one, along with compass flower (Silphium lanciniatum) and deer-tongued grass (Dicanthelium clandestinum). 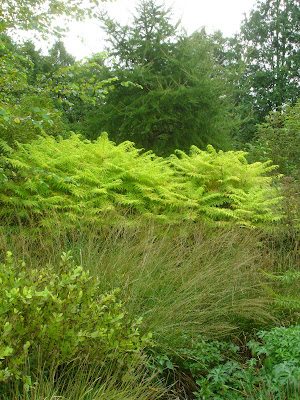 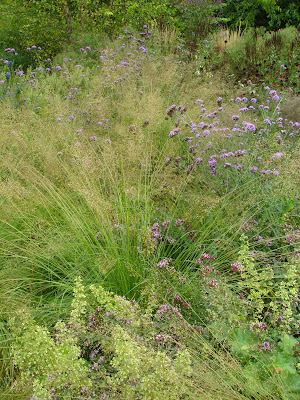 In the display gardens at Northwind it was obviously late summer. The dramatic sweeps of grasses, both native and exotic with a mix of shrubs and flowering perennials were already crashing from excessive rains, drought and high winds. But his chaos was beautiful and strangely restful compared to the more dramatic annual plantings elsewhere. 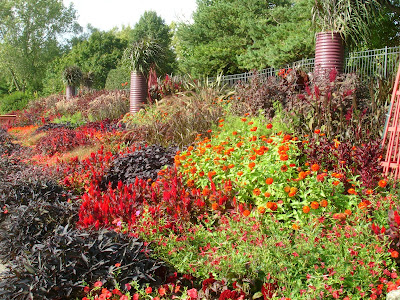 Although I was glad we stopped at the Rotary Botanical Gardens in Janesville. The outrageously unexpected red and black borders surrounding the parking were stunning. 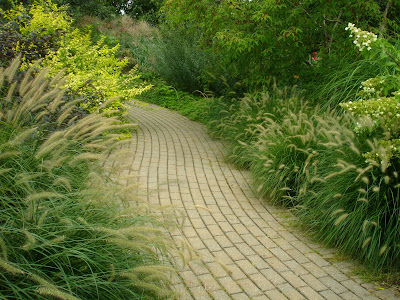 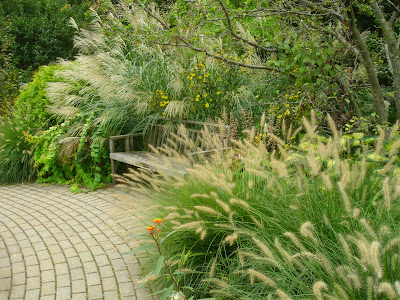 At the Olbrich Garden in Madison grasses were used through out, as architecturally as conifers or furniture. 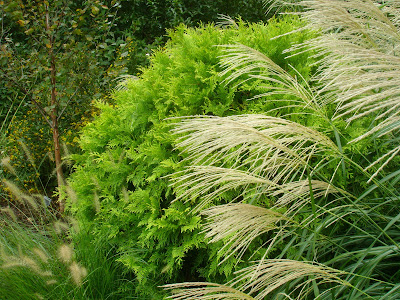 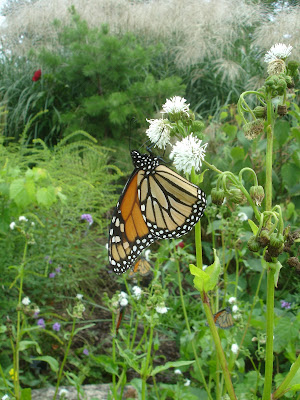 The Monarchs were leaving in great feeding flocks, if that is what butterflies travel in. And we, too, had to travel.

I borrowed a suitcase from my sister to pack all the plants I was bringing back. Who did I think I was? Dan Hinkley? Was I trying to retrieve a past I never truly appreciated? Or experienced? I had dug 3 black spruce (Picea mariana) from my parents farm. Was I trying to transplant the great northern forests that cover Canada to the Snoqulamie Valley? Or was I truly just experimenting with a tree that I've grown calmly and slowly fond of? I dug a piece of my mother’s fern leaf peony (Paeonia tenuifolia ‘Rubra Flora Plena’??) which I knew I could getback in Seattle, but it wouldn’t be from my mother’s garden. But when I saw the ‘Henry Eilers’ rudbeckia at the Northwest Horticultural Society’s plant sale ,where I bought even more plants, I realized maybe my search of Northwest nurseries was not as exhaustive as I thought. Maybe I am just suffering from the exhaustion of acquisition. But I know when that rudbeckia blooms and reminds me of a September day in rural Wisconsin, I will have forgotten the $15 dollars i spent on that extra peice of luggage and remeber a Septenber day in rural Wisconsin.
Posted by Daniel Mount at 11:59 AM
Newer Post Older Post Home