Last week it flooded in the valley.
A rather benign flood compared to the monster that hit us in January of 2009. This flood would have made most people nervous, but I was strangely comfortable with it. We were ready, everything was out of harm’s way. We blockaded the basement with boards, plastic and sandbags. With a naked Christmas tree in the house and plenty of food, we had dug the last of the potatoes, carrots and beets the week before, we were ready to be trapped for a day or two.
Knowing that everything was in order, it was easy to go into the deep sense of awe that a flood inspires, to be comfortable with 3 feet of water rushing across our property, to be thrown back in geologic time to when this valley was a Lake. And to be reminded how temporal everything is from the flood itself rushing by in a few days to the giant lake that took millennia to drain.
Michael and I had a chance to try out our new canoe. We paddled back to the unnamed lake hidden in the brushy marsh behind our house. It is nearly impossible to reach during the dry season, being so densely overgrown with salmon berry, willow and spiraea. With the high water we slid across the tops of it all, snagging only occasionally. The sun came out as it always does during a flood, after the horrific rains have passed. We skidded across big white clouds reflected in the murky water. We bushwhacked afloat down to the beaver pond and we flew out to the road, then paddled our way home and on to the half submerged drive. We agreed the canoe was a smart purchase, a good fit, right comfortable.
But one thing will never be comfortable: the quality of the water. The gray sludgy swill belches diesel fumes and septic farts as it passes. It is not pretty water. It is downright gruesome. If you fell in you’d be grateful for the hypothermia that took your life quickly. The infections one could get from this opaque soup! Horrifying! 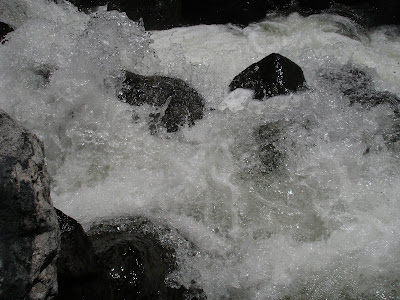 I like water when it’s brisk and sassy. Jumping down a mountain, slapping rocks; spitting, shouting and singing like a bunch of reckless teenagers. It’s ebullience charms. It’s power crowned with snow white froth, like flocking happy gulls. I could go on metaphorically for pages. It’s so alive and enlivening.
They say water kicked up like this creates an abundance of positive ions in the surrounding atmosphere. When we inhale them they produce biochemical reactions that increase the level of the mood chemical serotonin, which helps alleviate depression, relieves stress and boosts day time energy. It is a tonic I take as often as possible, living on the western edge of the Cascade Mountain Range. It’s better than any supplement and just about as good as sunshine, which is scarce right now. 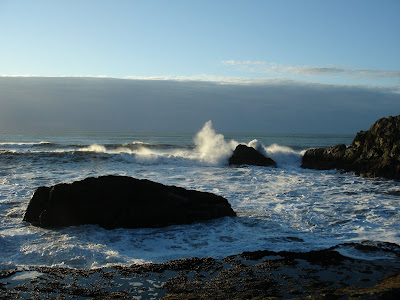 But nothing, absolutely nothing, compares to the rhythmic spanking the Pacific gives the western edge of the continent. Nothing compares to the sea foam, salt spray, the briny fishy stink of the beach. And the seemingly limitless expanse of water before you.
This is where those damned flood waters head, out to sea.
Leaving us to slosh through the muck and mire here in the valley, not a positive ion in sight.
Posted by Daniel Mount at 5:36 PM
Newer Post Older Post Home