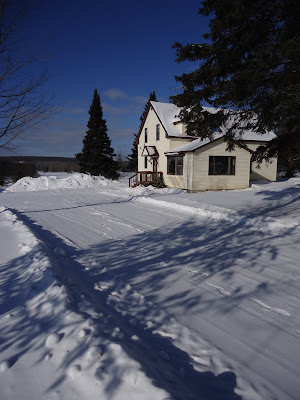 In January, as all the hope and sparkle of Christmas is stripped away, when we are left finally with what we’ve been avoiding: Winter, is when they begin to appear. Tropical Beaches. They appear on billboards and in magazines, on the sides of buses. Palm trees, blue waters and sunshine, everything we feel we are lacking.
So when I arrived in Milwaukee at the beginning of the coldest month of the whole winter, my sister was laughing, “ Why did you come to Wisconsin in January?”
I fished through my thoughts: “Cheap airfares?”; “ Work was slow, it was a good time to get away?”.
Actually I wanted to visit my parents at a time of year when they rarely get visitors. The Upper Peninsula of Michigan, or the U.P. as it is fondly known, isn’t much of a draw unless you like ice fishing or snowmobiling, neither of which were in my plans.
I love winter, real wintery winter, it must be encoded in my nordic genes. I had no problem whatsoever with the cold. It sure beat the soggy flooded cloudy valley back home. Breathing the dry cold air, like mountain top air, was so exhilarating, my post-flood blues fell off me in one big lump, like the ice that fell off the chassises of semis on the freeway as I drove further north and away from the tempering of Lake Michigan.
When I arrived at my parents farm outside Iron River the temperature was already 10 below zero. The snow was squeaky, dry and kick-able as sand. I ran from the car to the door, the house was, thankfully, as warm as an oven. A tropical island with bananas and oranges in a bowl.
By Saturday night the temperature had dropped to 28 below, that’s without a wind chill factor. I don’t even think it’s that cold on the top of Mount Rainier. I couldn’t resist going out before bed to see the stars. I slipped on some shoes and a jacket, I wanted to feel the cold. Become one with it.
It had been years since I had seen the stars glisten so. With no major cities near by and acres of national forest land surrounding my parents’ farm it is a very dark place at night. Stars are always particularly bright there. With the cold temperatures stripping every bit of moisture out of the air, icicles formed on my beard and mustache in the mere moments I was outside, the stars shined. Never have I felt so among them, felt the coldness of outer space so cuddlingly close. As the skin of my cheeks tightened and burned like some astringent spa treatment, I realized I would not survive long, even if I was filled with my mother rich stew and had a least three layers of underclothes between me and eternity. One needed a space suit for this kind of weather or a few shots of strong whiskey downed in foolishness. I could feel the cold air constricting in my throat as I breathed.Since the whisky was back in the house, I left the charms of the starry night sky behind for faux tropical comfort. 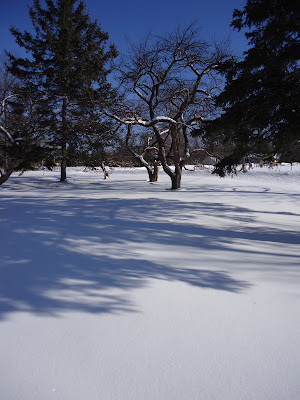 The next morning at breakfast we watched the clusters of chickadees, nuthatches (2 types), gold finches, actually drab finches in dull winter plumage, and red squirrels unfazed by the frigid temperatures, gorging on sunflower and millet seeds. My father in his new child-like wisdom wondered, “ Are those trees going to make it?” We looked out at their 100 year old apple orchard. I had to admit all the trees looked dead, not just sleeping. There is no “zonal denial” here. Zone 2 is zone 2. It took my mother years to find a forsythia cultivar that could survive the winter and there is only one rose in her garden, just a scraggly pink rugosa dwarfed by the climate. But my how here peonies and lupines thrive.
“ You’ll have to wait until May, “ I told my father, “ to see if they start to grow again.”

Later when it was sufficiently warmer, it was only 9 below, my mother and I went out for a snowshoeing around the 40. The biting cold was tempered by the lack of wind, yet we only lasted half an hour. And were back on the sofa reading and eating pretzels.
When I left a few days later the temperatures were decidedly over zero. The thermometer in my rental car read 13 degrees as I pulled out of their drive. I wondered how my parents had lived through over 30 winters there. Certainly they have a good furnace, and a knack for avoiding boredom I can’t fathom. Yet I envied them there life in such a pure and beautiful place, as if they lived on a mountain top like a Nepalese lamas. By the time I reached Milwaukee only 212 miles south and tempered by being on the shores of Lake Michigan it was in the 20’s. It felt balmy. 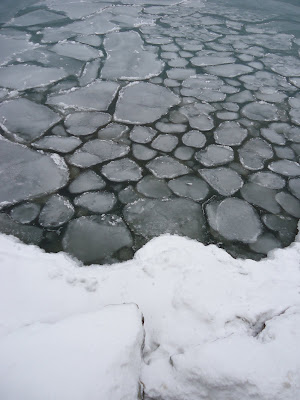 But it was still winter. Even that great hulking lake was icing up. 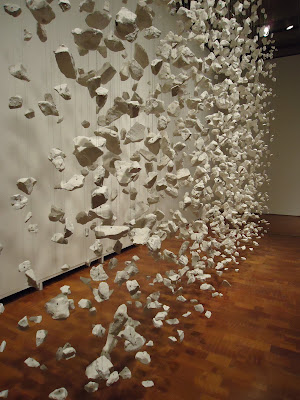 And even though I ran into the Milwaukee Art Museum to enjoy the colorful collection of folk art, I couldn’t stop my fixation with the white world of winter and sat on a bench in front of this sculpture ‘Edge of England’ by British artist Cornelia Parker made of chunks of the white cliffs of Dover suspended like a moment of memory. Snowy memory.
That’s all it is now, back in the snug green valley of the Pacific Northwest where the witch hazels and snow drops and the early daffodils bloom.
When I talked to my mother today she said contentedly, “ It warmed up; it got up to 15.”
I grumbled back about the gray and the damp.
Posted by Daniel Mount at 6:38 PM
Newer Post Older Post Home