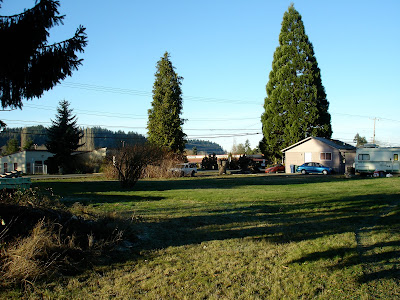 I’m sure the gardener who lives in this prefab house in downtown Carnation had no idea how big a giant sequoia (Sequoiadendron gigantea) would get. Actually the current gardeners, who I noticed barely find the time to mow the lawn, probably didn’t plant the tree, and the house even now seems like an afterthought. Which it probably is, replacing one of the older Craftsman style houses one finds in town. This tree is a sentinel in town, dwarfing not only the prefab with which it magnanimously shares a lot, but also the one story strip mall across the street, where we grocery shop. And actually all of Carnation’s humbly low architecture.

This tree, a sentinel above this ticky-tacky house made predominantly of conifer wood with some metal, glass and plastic thrown in for good measure, is a landmark on Tolt Avenue, Highway 203. It lets me know where my turn for the grocery store is. I still navigate by landmarks. Someone gave me a GPS once, but I never use it. It gives me more of a headache than looking at a map and following an inky line across the page with my index finger, and then paying attention when I drive. Like crossword puzzles I think this sort of navigation is good for keeping the mind fresh and the awareness alert. Besides I still don’t like being told what to do. Especially by an annoyingly nasal computer generated female voice.

Sometimes I wonder if the person who planted that tree had any idea what they were doing. Were they merely trying to screen their bedroom window from the glaring lights of the Shell station across the street? Did they have any idea that they were creating a landmark for future Carnation inhabitants? There is no better use of conifers than as landmarks. Their constancy, ‘O tannenbaum, O, tannenbaum’, is remarkable. When I plant conifers I like to think of them as landmarks and place them accordingly. Not that I’m trying to create landing strips for UFOs. But you have probably all been guided by a conifer into a gas station, or parking lot without even noticing it. It amazing how many arborvitae ( Thuja occidentalis), or creeping junipers (Juniperus horizontalis) let drivers know where the boundaries are at Shell stations. You are all familiar, no mater what part of the country you live in, of the ubiquitous arborvitae hedge [follow link to my article on arborvitae] guarding a property line, or screening a view. 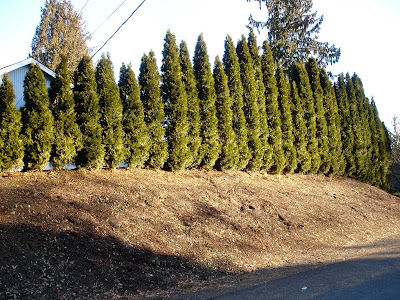 When using conifers as landmarks in the garden, I think of them as architectural punctuation. Sometimes they are full stops, like a hedge, and sometimes a languorous pause, or a bridge when used as specimens. They are everywhere used to this end. Though their status as guardians is buried under the hurry of modern life. 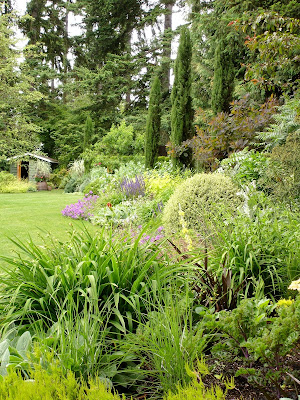 I used Italian cypress ( Cupressus sempervirens ‘Glauca’) in these mixed borders, not only as exclamation points, but also as bridge between the tall native conifers behind these borders. Their columnar habit mimics the massive trunks of these trees and carries the colonnade up to the lawn, like you are walking through a tumbling ancient temple. 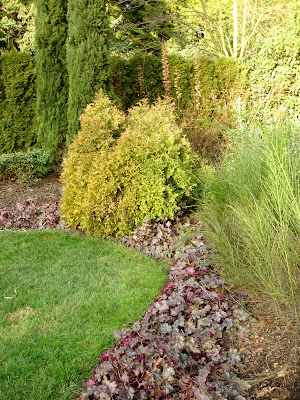 I also like to use arborvitae ‘Rheingold’ not only for it’s unique coloration and texture which blends and contrasts with the perennials and annuals I use in these kaleidoscopic borders, but also as commas in a border that might seem to ramble on if it weren’t checked by their coniferous presence. 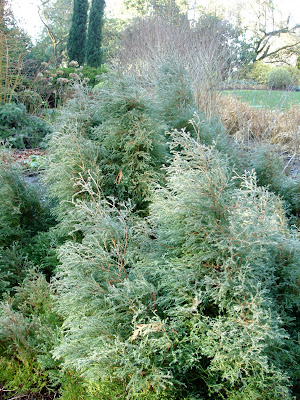 I like to use the somewhat floppy ‘Heather Bun’ Atlantic white cedar (Chamaecyparis thyoides). Because it takes a bit of shade and heavier wetter soils than most conifers, it is indispensable in this perennial border on clay. Its feathery texture works well with astilbes and Japanese iris.

I am also a great fan of yews ( Taxus sp.) There is a cluster of ancient yews near Forthausen, Germany, where my friend Eckhard had a farm. They are said to be the sight of ancient druidic rituals. On one of those rare hot days in Germany, we went to the shady valley where they live and sat at their roots which spilled into a bright sonorous creek. There was something magical about this spot. Was it just the escape from my urban life in Cologne? Was it the positive ions thrown up by the creek which bubbled and tumbled through the rocks and ancient yew roots? Or was there a lingering druidic presence we could sense when we finally quieted down and went into a hypnagogic trance induced by the creek's song? Powerful trees,a thousand years old. A portal between this world and the next? They are now held high by a different governing force, the German forest service which considers them a national treasure. And no one was there. There was no sign at the road advertising them, no parking lot close by. Just an impenetrable silence and sanctity I have only found a few other places.

I like the funereal heft yews lend to the garden. A darkness which most clients don’t like. Their long association with grave yards, where they served not only as emblems of resurrection but also because they're said to purify the air, and their poisonous berries have given them a sinister association contrary to their natural beauty. 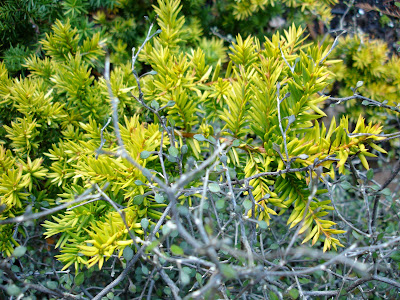 I used this dwarf golden Japanese yew (Taxus cuspidata ‘Nana Aurescens’) in some mixed borders for its year round bright impact. And to slip a little druidic magic under my clients’ noses, creating a landmark not only at the edge of a border, but possibly between this world and the next.
Posted by Daniel Mount at 12:16 PM
Newer Post Older Post Home