I realized last weekend that my obsession with age lately is not mine alone. I actually convinced Michael, and the dogs, to drive to the coast with me to see the world’s oldest (more about that later) living spruce.
I have been busy researching and writing about Sitka spruce for my column, “The Story of Plants”, in Garden Notes the quarterly of the Northwest Horticultural Society. Consequently I have spent a lot of time reading about spruces of all kinds. But it was our Northwest native the Sitka spruce, or tidelands spruce, (Picea sitchensis) which captured my imagination. It is a tree I rarely noticed until I decided to write about it. Now I see it everywhere. Well, not everywhere, it has a rather limited distribution fairly close to the coast, and has only a few garden worthy cultivars, which are rarely available. This fast growing conifer has managed to become the most popular plantation tree in the British Isles, though. Here there are still enough wild stands. It is a large part of the lumber industry in Alaska, where it is also the state tree.
Saturday we drove through Tacoma shopping traffic, the worst of our travails, on our trip to the coast. I usually travel to the rain forest in the summer. After a few days of sun on the coast, the cool mossy shade of the forest is a pleasant respite. As we neared the coast I had to crank up the windshield wipers. Yet my excitement rose. We would see the rain forest “in the rain”. That Michael was a willing companion is a testament to his good nature and general affability. 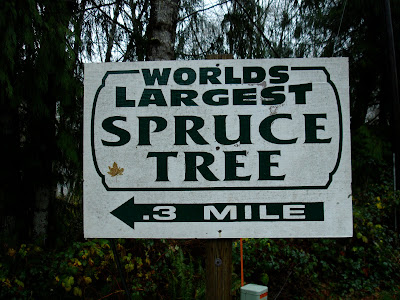 Our first stop at “The World’s Largest Spruce Tree”, a tourist attraction on the south side of Lake Quinault was quick. It was dumping buckets as we pulled to the side of the road, scuttled quickly through puddles and swampland to find “The World’s Largest Spruce Tree” had a paved parking lot only 100 feet away. In our impermeable arrogance we did not put on our rain gear, so we were wet, soaked I should say, quickly, as were the impervious dogs. But that didn’t dampen our awe of this magnificent tree. With a circumference of 55 feet 7 inches and a height of 191 feet, with warty buttresses supporting this massive column of wood, and branches dropped in the recent wind storm lying beside it like felled trees who wouldn’t be awed (in the most virtuous sense of the word.)
The sign before it announced that it was also 1000 years old. Yet this same sign which boldly claimed it “The World’s Largest Spruce Tree” (the previous record holder, in Oregon, fell in a wind storm in 2007) said nothing about it being the oldest. In all the research I had done most authors said Sitka spruces range from 400-750 years old, a few stretched that to 850. But none had mentioned a 1000 year old tree. Had they missed the sign on Highway 101? Or had they, like me, driven by many times with the Reagan-esque thoughts of “ if you’ve seen one, you’ve seen them all”? 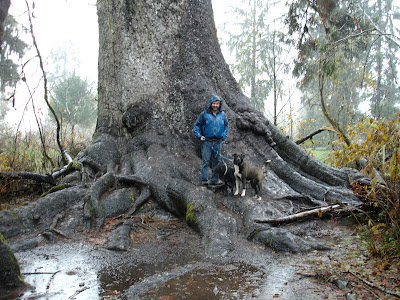 “Wouldn’t this tree also be the oldest?” I asked Michael.
The poor guy had no answer. He just shoved the sopping wet dogs back into the truck dutifully.
The tree I had in mind when we set out was one I read about. It lives at the campground at the end of 12 miles gravel road in the Queets Valley. Might it be the oldest? We drove passed scores of fishermen parked along the road which runs parallel to the lower Queets River and deeper into the rain forest. The dense moss that hung, clung and literally coated everything lead me to believe it was not only the conifers which gave Washington the nickname “The Evergreen State”.
Eventually we found that the signed which warned us that the road was closed 7 miles ahead was right. Just before the barricade we could see the mudslide that had wiped out the road years before, though our brand new map still showed the road as complete and the campground accessible. 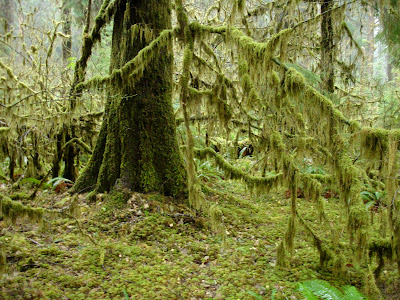 So we parked and ate our turkey sandwiches and clementines behind the the mist pebbled windshield. Then headed out for a walk. Between the gargantuan trees, and moss and fern plush under story this place was other worldly. Was it the rain that lent the magic? I had been to the rain forest before marveled at its beauty. But this time...It was utterly primeval, even with a road through it. Understandably I wanted to wander off into the green, take a nap, feast on mushrooms, and resume the life of the forest creature I had evolved away from. To dwell once again in this ramshackle splendor, the exquisite collapse and defiant rising up of it all. In this cacophony of silence. 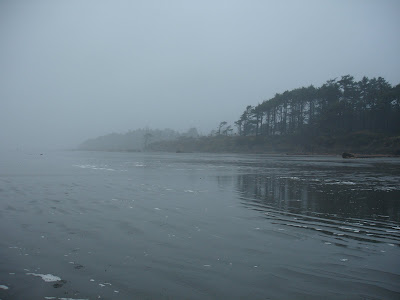 But we wanted to run the dogs on the beach yet that day. So back in the truck we hopped and down the road to the beach. The land seemed to melt into the misty roar of the Pacific, as the little light we had under the cloud cover drifted off toward night. The rain pelted us again and though we had lost our impermeable arrogance we had gained a dog like imperviousness. An imperviousness shared with the Sitka spruce growing right up to the tide line. Here away from the protection of the river valleys they became twisted, threadbare and stunted, probably never reaching great age, as the stormy Pacific often dragged them into the waves. 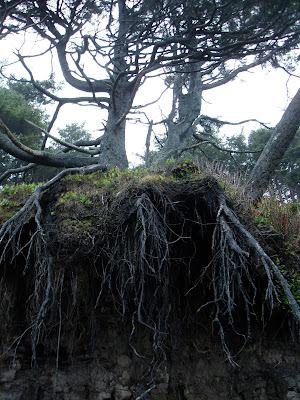 When we got home I began the clickity-clack of a google search: Oldest Spruce. There was no mention of the massive tree we saw at Lake Quinault. Nor any Sitka spruce. There were only some small twisted Norway spruce (Picea abies) on a mountain top in Dalarna, Sweden. The oldest, recorded as being 9550 years old, stripped the 4767 year old bristle cone pine (Pinus longaeva) of California for the title of “The Oldest Tree in the World.” Actually the oldest living being.
I don’t know that I am truly impressed by “the tallest”, “the fastest”, “the most” or “ the best”. But the superlative “ the oldest” stops me in my tracks. “The World’s Largest Spruce Tree” wasn’t exactly the oldest, not even at 1000 years, yet it woke me to my youth, my brevity in this world. And that was enough.
We have one Sitka spruce on our property, a youngster of around 50 years, my “guesstimation” because I like to share my age with something 60 feet tall. I call it the bear tree because the bear’s path in and out of the swamp wraps around it. And it acts as a sort of end point of cultivation and beginning of wildness. Owls roost in it at night, and in the morning song birds cling in clusters to its branches eating aphids. And in a storm rsaven bounce and swing on it’s wind blown branches. I look forward to growing old, or at least older with it, knowing that neither of us will probably ever be “The Oldest” anything.
Posted by Daniel Mount at 8:07 AM
Newer Post Older Post Home