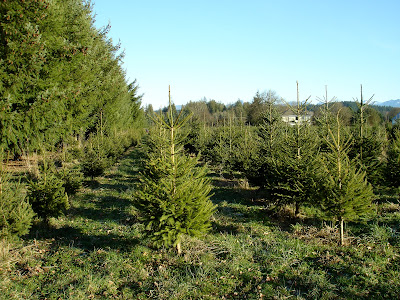 Each day I drive through a canyon. Not of stone, but of conifers towering 5 stories or more above Highway 202. They are mostly Douglas firs (Pseudotsuga menziesii), the most popular Christmas tree in the U.S. There are a few western red cedars (Thuja plicata) and even fewer Sitka spruce (Picea sitchesis), along with arbor vitae (Thuja occidentalis) and white pine ( Pinus strobus) thrown into the mix by man. I drive through this gauntlet from country life to suburban work and back. All summer long I barely notice these conifers, but his time of year when all else slips back their magnificence is revealed and I can’t help but admire our stunning native trees.
My sister Eileen calls all conifers Christmas trees, more out of affection than ignorance I suppose. And I’ve had clients want conifers planted in strategic spots for lighting up at Christmas. And others who didn’t want conifers because they think of them only as Christmas trees.
I was surprised in my limited search for the history of the Christmas tree, how conflicting that history is. Apropos of The Bible the prophet Jeremiah decries the bringing of cut trees into the house and decorating them as heathen and warns the Israelites to stop, on the other hand the prophet Isaiah decorated his sanctuary with, among other things, fir boughs.
The fir tree is definitely what the Germans are singing about when they sing “O Tannenbaum”. Before botanist got nit-picky with plants "fir" was a more general term for needled conifers including spruce. It is not coincidental that the name is close to the word "fire". These trees, easily ignited were thought of as fire trees, some even considered them the storehouse of the sun. Now “fir” refers to species in the genus Abies. The word spruce, the botanical Picea, comes from spruce fir or pruce fir meaning the fir tree of Prussians. And Douglas fir is not a true fir at all, but I don’t want to make this as confusing as the holiday they’ve come to represent.
Decorating with conifer boughs at winter time and in particular at Winter Solstice has a long history of practice and prohibition. The first Christians in Rome considered it a pagan act as did the early puritanical Americans; both forbade the practice. The history of what we know call the Christmas tree started in Rhenish Prussia, western Germany, in the 16th Century and remained there until Queen Victoria persuaded her German Husband, Prince Albert, to put one up in the palace in 1840. The rage for Christmas trees that this began in England and subsequently America and the rest of the world has not stopped to this day.
Most people I talked to in the last weeks said they get a tree because they love the smell in the house. This comes as no surprise to me. Shamans in North America, as well as ancient Celts used the fragrant boughs of conifers, especially firs and spruce to chase away evils spirits. Conifers are even ritually planted in graveyards to protect the departed from malevolent forces trying to capture their souls while pointing heavenward like road signs.
When I asked my in-house, speculative biochemist, Michael about this, he said there were probably some mood elevating compounds in the essential oils of conifers. My google search turned up evidence from folk wisdom to scientific research to support his suspicions. I know like many I love the smell, but I always thought it was the spiked egg nog elevating my spirits.
The subtle power of conifers is buried under the tinsel. The other day I was in a Pho’ restaurant for lunch. On the counter next to the Buddha, you know the big fat smiley Buddha, “a right jolly old elf”, was a little purple foil Christmas tree with over-sized red balls all over it. I was sorry I didn’t have my camera, or ask one of the barely English speaking staff what it meant to them.
Luckily the meaning of Christmas, and it’s tree, are as jumbled as the proverbial box of Christmas lights you swore you’d put away tidily. It has freed Christmas from dogma and allows each to find their own meaning, whether it is Christian, Pagan, Capitalistic or Unitive. In my own evolving relationship to the holiday, which used to set me spinnin, I am finding a simpler way. Less shopping, less eating, less stress. And as they say less is more. For me the more became a deeper interest in conifers as garden elements, as plants, and as emblems. I am only at the beginning of this new relationship to conifers. It had Michael and I heading out to the rain forest a few weeks ago. Yet it did not stop us from going to Carnation Tree Farm and cutting down a Norway spruce (Picea abies) and decorating it.
But it also has me looking a lot harder at these plants which have accompanied us through our history, silently, and potently. 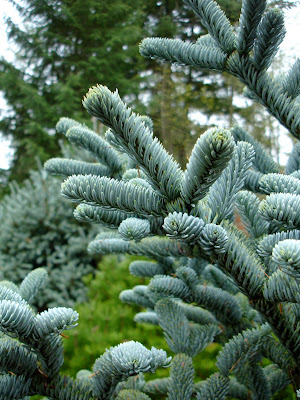 One of my favorite conifers, and a popular Christmas tree, the noble fir (Abies procera). Here is the cultivar called 'Noble's Dwarf' which I photographed at Coenosium Gardens near Eatonville in late November. I'll be posting more photos from this incredible collection in a few days.
Posted by Daniel Mount at 1:30 PM
Newer Post Older Post Home